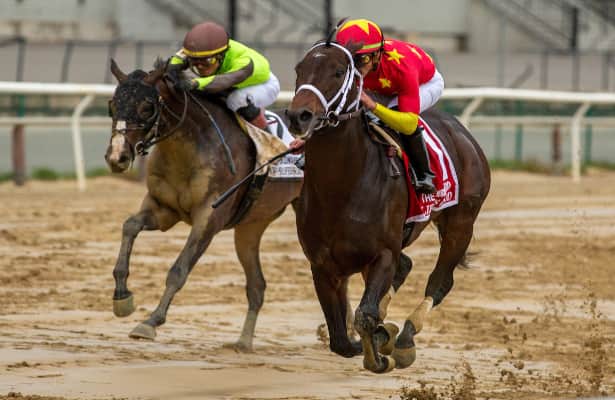 Multiple Grade 1-winner Life Is Good was challenged by Law Professor at the top of the stretch but kicked away to reward his 1-9 heavy favoritism in a gate-to-wire 1 1/4-length victory in Saturday’s Grade 1, $500,000 Woodward for 3-year-olds and up during the Belmont at the Big A fall meet at Aqueduct Racetrack.

Life Is Good, trained by Hall of Famer Todd Pletcher and owned by WinStar Farm and CHC Inc., entered off consecutive wins in the John A. Nerud (G2) in July at Belmont Park before capturing the prestigious Whitney (G1) last out on Aug. 6 at Saratoga Race Course.

In his Aqueduct debut, the 4-year-old Into Mischief colt broke sharp under jockey Irad Ortiz, Jr. from the inside post and led the compact four-horse field through fractions of 24.40 seconds for the quarter-mile and the half in 48.60 over a sloppy and sealed main track.

Law Professor, who tracked in third position under rider Jose Ortiz before moving up to second as three-quarters went in 1:13.07, made a bid heading for home. But Life Is Good powered to the wire to win for the sixth time in his last seven starts, posting a final time of 1:49.57 for the nine-furlong contest.

“He’s quick out of there,” Ortiz, Jr. said. “There was not too much speed in the race and the first part of the race, there was a lot of water – we got a lot of rain. I wanted to get off the rail and was able to do it. He broke fast, and he stayed there [on the lead] the whole time.

“The way he relaxed today, he can do anything,” Ortiz, Jr. continued. “That’s the good thing about him. He’s getting older and his mind is doing much better. I asked him pretty good from the quarter-pole to the wire, but he responded well.”

Life Is Good’s eighth career graded stakes victory moved his overall record to 9-1-0 in 11 starts and will allow him to enter the Grade 1, $6 million Breeders’ Cup Classic on November 5 at Keeneland with momentum. He returned $2.10 on a $2 win wager and his fourth career Grade 1 score helped improved his career earnings to $4.36 million.

“You could tell going into the first turn he had his ears straight up and was really relaxed,” Pletcher said. “That was good, but it also maybe plays against his strength a little bit to be that turned off. Part of his brilliance is being able to go fast and keep going. It was the logical tactics for today, but I don’t think it’s his preferred running style. His real weapon is his high-cruising speed and the ability to keep going.

“I was confident that he would respond when asked, but it was his first time over a sealed off track, and this track has not been playing real fast since the meet began,” Pletcher added. “Any time you’re a prohibitive favorite like that, you’re concerned about those things.”

Following the win, Life Is Good will set his sights on winning a Breeders’ Cup race for the second straight year. In 2021, he capped his sophomore season with a victory in the Breeders’ Cup Dirt Mile at Del Mar and has continued that success this year, commencing the current campaign with a win over last year’s Breeders’ Cup Classic winner and Horse of the Year Knicks Go in the Pegasus World Cup (G1) in January at Gulfstream Park before recording three consecutive graded stakes wins heading into his next engagement in Kentucky.

“The plan is to probably ship on Monday afternoon to Keeneland,” said Pletcher, who won the Woodward for the fourth time, adding to his victories in 2015 (Liam’s Map), 2010 (Quality Road) and 2007 (Lawyer Ron). “This was one of those [races] where there was only one satisfactory outcome, and that’s to win. We wanted to make sure we did that, while also keeping in mind that we have a bigger goal in five weeks so we tried to balance that out the best we could.”

Law Professor, the winner of the off-the-turf Santa Anita Mathis Mile(G2) to close his 2021 campaign, came in second in a graded stakes for the second time in his 4-year-old year for trainer Rob Atras. At 26-1, the gelded son of Constitution equaled his finish in the San Pasqual (G2) in February at Santa Anita.

“I’m very happy. This is the way he’s been training and we thought he was just as good if not better on the dirt,” Atras said. “I know it was sloppy, but we were expecting a big performance. We knew what we were up against in running against Life Is Good. He probably ran just as good or better than we thought.”

The 69th edition of the 1 1/8-mile Woodward was the first time the prestigious race was held at Aqueduct since 1967, when Hall of Famer Damascus bested champions Dr. Fager and Buckpasser. Initially run at Belmont Park in 1954, the Woodward called Saratoga Race Course home from 2006-20 and made a return to Big Sandy last year before being contested at Ozone Park this year.