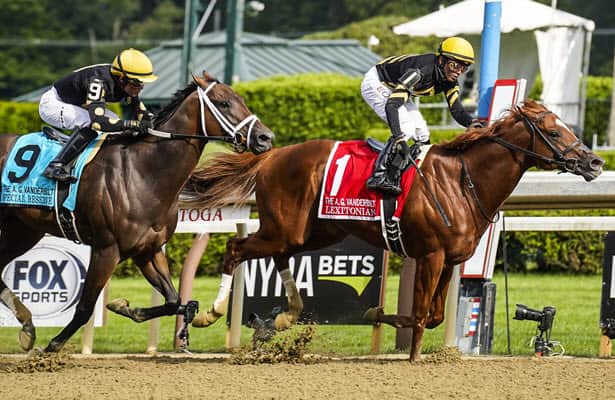 Calumet Farm homebred Lexitonian dueled Special Reserve from the top of the stretch and kicked away in the final sixteenth as the 34-1 long shot captured Saturday’s Grade 1, $350,000 Alfred G. Vanderbilt by a half length at Saratoga Race Course.

The 37th running of the prestigious six-furlong main track sprint for 3-year-olds and up saw Lexitonian capture a graded stakes for the first time since May 2019 and his first win overall in 14 months.

Breaking sharp from the inside post under jockey Jose Lezcano, Lexitonian led a loaded nine-horse field that included six graded-stakes winners through an opening quarter-mile in 22.04 seconds on the fast track. Special Reserve then was urged up by Joel Rosario, putting a head in front of Lexitonian in recording the half-mile in 44.45.

Out of the turn, Special Reserve maintained a slim lead to the outside that Lexitonian quickly erased, with the rivals running eye-to-eye in the stretch. The duo of golden cap-attired riders each gave their respective horses right-handed encouragement, with Lexitonian gaining the edge from the inside and completing the course in 1:09.38 as the biggest price on the board.

Lexitonian, who ran second in the Churchill Downs (G1) on Kentucky Derby Day May 1 before finishing sixth and being eased last out in the Metropolitan Handicap (G1), won for the first time in seven starts for trainer Jack Sisterson. It was his first graded-stakes score since the Chick Lang (G3) in May 2019 at Pimlico.

“Growing up, this sport was a passion of mine and now it’s a livelihood,” Sisterson said. “I’m speechless. To be up here on a stage like today and even to compete in a race like this is very humbling.

“I said to Jose, he’s a horse who fights. Please get him out of the gate and engage him early,” he added. “I believe if you engage him early, he will feel the pressure and respond to that. At the half-mile pole if he comes off the bridle, perfect. That’s him and he will respond. It’s even better if a horse heads him because he’ll fight on again, which happened. He stuck his head out in front today.”

“This horse is a very good horse. He tries hard all the time,” Lezcano said. “He’s the type of horse that needs to be involved and sometimes he doesn’t break all that well and has to stay in the back. He broke well today. Joel tried to get away from me, but when I dropped my hands, he took off again and won the race.”

“I have to give Lexitonian a ton of credit,” Sisterson said. “He ran in the Met Mile and he was eased. You’d think a horse that was eased and thrown in some clunkers, you’d sit back and think let’s drop him down a grade and give him a confidence builder. But I’ve run him in every Grade 1 and been hard on him and this is how he responds today. I have to give credit to Lexitonian.”

The Mike Maker trainee has finished first or second in all six starts during his 5-year-old campaign.

“He was comfortable. He liked to be right there,” Rosario said. “It’s a tough beat. I thought we got him and then the other horse to the inside beat me.”

Whitmore, the seven-time graded stakes winner trained by Ron Moquett and ridden by Ricardo Santana Jr., finished in the money for a fifth consecutive stakes, besting Montauk Traffic by 2 1/4 lengths for third.

“I got a perfect trip. He hadn’t run in a couple of months,” Santana said. “He’s a good horse.”