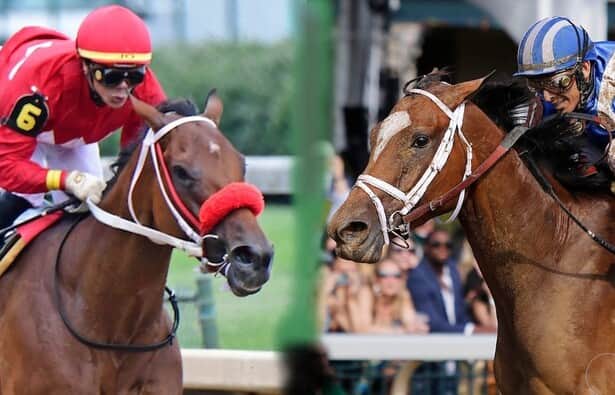 The Grade 1, $500,000 Ogden Phipps has had no shortage of legendary matchups in its 53 editions and will continue that pattern this year as defending race winner Letruska will face the formidable Malathaat in the 1 1/16-mile test for older fillies and mares at Belmont Park.

The Ogden Phipps is one of three Breeders’ Cup “win and you’re in” races on the Belmont Stakes card, awarding a berth into the Distaff to the winner. Other Breeders’ Cup Challenge Series races on the card are the Jaipur (G1, Turf Sprint) and Metropolitan Handicap (G1, Dirt Mile).

St. George Stable’s Kentucky homebred Letruska, a 6-year-old daughter of Super Saver, was last seen earning a determined repeat victory in the Apple Blossom Handicap (G1) on April 23 at Oaklawn Park. Ridden by Jose Ortiz, Letruska set the pace for the 1 1/16 miles and was met with a challenge by returning rival Clairiere at the top of the lane, but she rebroke and dug in to secure the victory by 1 1/4 lengths.

“Nothing that happens with her is a surprise,” said trainer Fausto Gutierrez. “She keeps on confirming what we believe about her. To win two Apple Blossoms, she’s part of history.”

Letruska began her career in Mexico with Gutierrez, where she was undefeated in six starts, including a pair of Group 1 wins in 2019 in the Clasico Esmeralda and Clasico Diamante. Gutierrez shipped Letruska to Gulfstream Park in December 2019, where she won her American debut in the Copa Invitacional del Caribe going 10 furlongs. Her upward trajectory continued in 2020 with a pair of Grade 3 wins in the Shuvee at Saratoga Race Course and the Rampart at Gulfstream.

The bay mare rocketed to stardom in 2021 when she defeated two-time Eclipse Award winner Monomoy Girl by a nose in the first of her two Apple Blossom triumphs. The win kicked off a series of graded victories that would earn her the Eclipse Award for champion older dirt mare and was one of four Grade 1 victories for her last year.

“After she won the first Apple Blossom against Monomoy Girl, she’s keeps proving why that happened,” Gutierrez said.

In last year’s Ogden Phipps, there were few tense moments for Letruska as she broke sharply and quickly established the lead to win easily under Ortiz, who rode her for the first time after his brother, Irad Ortiz Jr., was forced to miss the race when he sustained an injury in a spill the week before.

She went on to go 5-for-6 in her outings leading up to this year’s Ogden Phipps, including a trio of Grade 1 victories in the Personal Ensign at Saratoga, the Spinster at Keeneland and her repeat Apple Blossom triumph.

Letruska was expected to give a big performance in the Breeders’ Cup Distaff to close out her 5-year-old campaign in November at Del Mar, but she was a well-beaten 10th after she and Private Mission dueled through blistering fractions to lead the field of 11 through the nine furlongs.

“It was just a bad race,” Gutierrez said. “Every race and track is different. It was a suicidal pace for all the horses, and the pacesetters paid the consequences. I never imagined I would have a horse with the obligation to win every race.”

Gutierrez said there was no question whether Letruska would come back for a 6-year-old campaign after the Breeders’ Cup.

“The plan was that if we have a horse who has the chance to win like her, we’ll run her. My exercise rider told me the other day that she feels like a first-time starter 2-year-old. We don’t get a lot of horses like this one, and she’s ready to win. She’s like Tom Brady,” Gutierrez said with a laugh.

The only time Letruska has faced Malathaat was in the Breeders’ Cup Distaff. Gutierrez said he is confident Letruska has the class to take on any challengers.

“Whatever is coming for us, we need to accept it. This is the way,” said Gutierrez. “We have a horse has won 10 graded stakes in 20 months at different tracks and conditions.”

She will face no shortage of formidable foes, including the three-time Grade 1 winning Malathaat for Hall of Fame trainer Todd Pletcher.

Owned by Shadwell Stable, Malathaat was a $1.05 million yearling purchase at the 2019 Keeneland September Sale and is out of the Grade 1 winning A.P. Indy mare Dreaming of Julia, who won the 2012 Frizette (G1) at Belmont for Pletcher.

The bay daughter of Curlin enters from a gutsy win in the Doubledogdare (G3) on April 22 at Keeneland, her first race since she closed out her sophomore campaign with a close third-place effort in the Breeders’ Cup Distaff in November at Del Mar. In the Doubledogdare, Malathaat was rated 5 1/2 lengths off the pace in fifth under regular Hall of Fame rider John Velazquez and swung three wide in the turn to inch away to her three-quarter length score over returning rival Bonny South.

Pletcher said he chose to run Malathaat in the Doubledogdare over the La Troienne (G1) on May 6 at Churchill Downs when her training showed she was ready to run.

“It was really just a matter of her getting ready sooner than the La Troienne was coming up,” Pletcher said. “The fact that she won the Ashland there (at Keeneland) played some influence in it as well as the Breeders’ Cup being there this year. I felt like a little more experience at Keeneland is good, and it gave us some more extra space in between the Phipps. I was pleased with the way she ran and she trained super since then.”

Malathaat’s sparkling resume also includes a memorable victory over Grade 1 winner and returning foe Search Results in the Kentucky Oaks last May where she overcame trouble at the start to score a neck victory. She went on to earn a 1 1/2-length win over fellow Ogden Phipps aspirant Clairiere in the Alabama (G1) at Saratoga Race Course. She was awarded the Eclipse Award for Champion 3-Year-Old filly for her outstanding campaign.

Pletcher said the filly has changed for the better in her 4-year-old season.

“She’s carrying her weight really well this year,” Pletcher said. “She looks phenomenal, and I’m super happy with her.”

Malathaat will be returning to a one-turn race for the first time since winning the one-mile Tempted at Aqueduct Racetrack in her juvenile season.

“It’s a one-turn race, so that will change the dynamics a little bit,” Pletcher said. “Letruska will likely be the pacesetter, so we’ll have to keep an eye on her. It’s a deep field with a lot of quality fillies in here. I’m looking forward to it.”

The royally-bred Clairiere is in search of her second Grade 1 victory for Hall of Fame trainer Steve Asmussen and owner/breeder Stonestreet Stables. The bay Curlin filly posted a seasonal debut win at Fair Grounds in optional claiming company ahead of her game runner-up effort to Letruska in the Apple Blossom (G1).

Out of 2016 Ogden Phipps winner Cavorting, Clairiere has competed against the best in her division since her juvenile campaign. She picked up her first graded win at 3 with last-to-first victory in the Rachel Alexandra (G2) at Fair Grounds, the start of a sophomore campaign that saw her earn four graded placings and a Grade 1 triumph in the Cotillion at Parx Racing in September.

“I think she’s better than she was last year,” Asmussen said. “She’s more mature and is simply a bigger, better, stronger and faster filly. She is carrying on her family tradition proudly. With her being one of the most impeccably bred horses there is in training, being by Curlin and out of Cavorting.”

Joel Rosario, who has ridden Clairiere in her two starts this year, rides again from post 4.

Search Results is also in search of her second Grade 1 victory, entering from a redemptive win in the Ruffian (G2) on May 8 over Big Sandy. Trained by Chad Brown and owned by Klaravich Stables, the 4-year-old daughter of Flatter improved from a disappointing third-place finish as the 3-5 favorite in the Distaff (G3) on April 9 at Aqueduct.

Before the Distaff, Search Results was away from the races for eight months after a third-place finish in the Test (G1) behind the victorious Bella Sofia. Her sophomore season was highlighted by a half-length win over Obligatory in the Acorn (G1) at Belmont, which came on the heels of her narrow loss to Malathaat in the Kentucky Oaks.

“This is a really tough race, but she’s training really well,” said Brown. “Unfortunately, she has a habit of not changing her leads, but she has been in her training, so I’m hoping she does it in the afternoon on Saturday.”

Irad Ortiz Jr. retains the mount from the outermost post 5.

Completing the field is the consistent Bonny South, who arrives at the Ogden Phipps from four consecutive graded-stakes placings. The Brad Cox trainee was last seen nearly besting Malathaat in the Doubledogdare and earned two Grade 1 placings behind Letruska in the Personal Ensign at Saratoga and Spinster at Keeneland last year.

Flavien Prat will ride the 5-year-old daughter of Munnings for the first time from post 2.