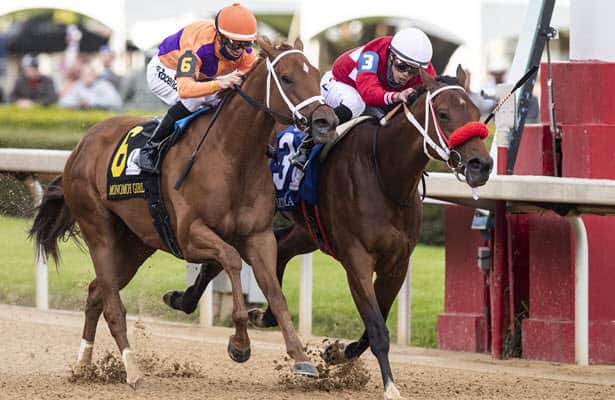 The Apple Blossom Handicap was supposed to be a two-horse race Saturday evening. And it was. It was just not the pair of horses widely expected.

Instead of Monomoy Girl and Swiss Skydiver at the end, it was Letruska and Monomoy Girl. That’s right. Letruska.

The 5-year-old mare who cut her teeth at a little racetrack in Mexico was the one who refused to let the two-time Eclipse Award winner pass her for good. In only her second U.S. Grade 1 start, she fought back to engage Monomoy Girl in a riveting run to the wire. And in a photo finish it was Letruska, not Monomoy Girl, who won the $1 million race at Oaklawn Park.

“When (Monomoy Girl) took the lead, and I saw Swiss Skydiver start to go a little bit back, in my mind I thought, ‘Second is very good. We finished close,’” winning trainer Fausto Gutiérrez said. “But (Letruska) started to come back and come back. I didn’t see the (photo) very clearly, but someone said, ‘You win.’ I very carefully checked the replay, and I said, ‘Oops. We win.’”

The third betting choice in the field of six older fillies and mares, Letruska (3-1) won by just a nose. Monomoy Girl (3-5) finished second, 6 1/2 lengths better than Swiss Skydiver (9-5), who pulled jockey Robby Albarado early in the race and finished third. Getridofwhatailesu (21-1) was another 1 1/4 lengths behind in fourth.

The sixth different jockey to ride Letruska in her last nine races, reigning three-time U.S. champion jockey Irad Ortiz Jr. engineered the perfect trip. He never led by more than a length, so when Florent Géroux made a go-ahead move on Monomoy Girl in the second turn, Ortiz had plenty left in the tank to put the 5-year-old Super Saver mare in position to challenge the mighty champion. And, believe it or not, win.

“For a minute I thought I was second,” Ortiz said. “But I still had something. I knew my filly had a little bit. I knew (Monomoy Girl) was going to be hard to catch, but I did it. She did it. My filly did it.”

Knowing that Letruska had been slow out of the gate in her recent starts, Gutiérrez told Ortiz not to let that stop him from going forward – and staying there. Sure enough, Letruska was the second slowest at the break, but Ortiz hastened her to the front.

“We are the speed of the race,” Gutiérrez said. “I wanted her to move and go in front and set the pace. Make the others think what it is they have to do, because this was a race for three horses.”

Gutiérrez got that right. After a half-mile Letruska, Swiss Skydiver and Monomoy Girl were 1 1/2 lengths apart – and seven lengths ahead of the second half of the field.

As Monomoy Girl made a three-wide move to lead going into the far turn, Swiss Skydiver retreated.

“She was in a good spot the whole way,” Albarado said. “She had a good chance turning for home to go on with it – and didn’t.”

While Swiss Skydiver lost ground, Monomoy Girl might have lost some of her focus in the homestretch. Géroux said that was nothing new.

“She just started wandering around at the end,” he said. “She’s done that pretty much all her career. It’s too bad we got caught today.”

After the race Ortiz was ruefully triumphant.

“I’ve got to do my job and beat (Monomoy Girl),” he said, seemingly sending a message to most of the estimated 8,000 fans at the track who bet against Letruska. “Honestly, I’m following the rules and trying to beat her. That’s horse racing. But I feel bad for (Monomoy Girl’s owners). They are great for the sport. They spent a lot of money. I love watching her, too.”

What Ortiz said underscores a fact in horse racing: money cannot always buy a victory. Monomoy Girl was sold for $9.5 million the day after she won the Breeders’ Cup Distaff last fall. B. Wayne Hughes’s Spendthrift Farm, MyRacehorse.com and Sol Kumin’s Madaket Stables sent her right back to trainer Brad Cox to race her as a 6-year-old – maybe even against the best male competition the sport has to offer.

On the way to those ambitious goals, she was defeated by a mare who is out of the Successful Appeal dam Magic Appeal, herself a maiden winner in her only season of racing. Bred and owned by Germán Larrea, she was 6-for-6 with two Grade 1 victories at the Hipódromo de Las Américas in Mexico.

“For me it’s incredible, because I come from a small racetrack in Mexico City,” Gutiérrez said. “We had the confidence to send her here.”

Letruska delivered quickly, winning the 2019 Copa Invitacional del Caribe at Gulfstream Park. She had also won 3 of 6 graded-stakes starts since last summer and lost by only a head to Shedaresthedevil last month in the Azeri Stakes (G2) over the same course and distance as the Apple Blossom.

Gutiérrez said the seven-furlong La Troienne Stakes on the Kentucky Oaks undercard was going to be the next stop for Letruska. That was before Saturday’s result raised the bar.

“After this I’m not sure what is the correct decision,” he said. “After this big effort we have to reorganize, because she’s one of the tops.”