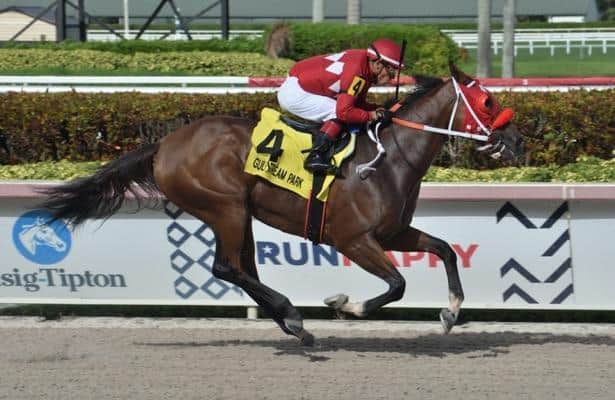 Trainer Fausto Gutierrez had penciled in the Grade 1, $250,000 Madison at Keeneland for Letruska’s next start before calling an audible and opting for a less ambitious spot in Saturday’s $60,000 Added Elegance at Gulfstream Park.

The 4-year-old daughter of Super Saver certainly found the mile overnight stakes to her liking, running six other fillies and mares off their feet with a dazzling front-running victory under Emisael Jaramillo.

“Check the fractions she ran today,” said Gutierrez, whose trainee has captured her ninth victory in 11 career starts. “With these fractions she can kill any race. She’s a really good horse.”

Multiple graded stakes placed Nonna Madeline, the 6-5 favorite ridden by Edgard Zayas, chased Letruska throughout the Added Elegance but could get no closer than 2½ lengths at the finish. Bella Ciao closed to finish third, eight lengths farther back.

Letruska had run over Gulfstream’s main track once previously, beating older males in the Copa Invitacional del Caribe by 4½ lengths on the Dec. 8 Clasico Internacional del Caribe program to remain undefeated in seven career starts, the first six coming in Mexico. St. George Stables’ homebred sustained her first loss in her turf debut when she finished off the board in the Dec. 28 Tropical Park Oaks at Gulfstream. She rebounded to remain undefeated on dirt with a 2¼-length front-running victory over Nonna Madeline in an April 16 allowance race at Oaklawn Park. Two weeks, later she set a pressure pace before finishing third behind graded-stakes winner Blamed to sustain her first career loss on dirt in another allowance at Oaklawn Park.

Saturday, Letruska bounced back in eye-catching fashion to earn a shot at stronger competition next time out.

“We’ll have to think about it,” Gutierrez said. “Today, she showed the class that she has.”