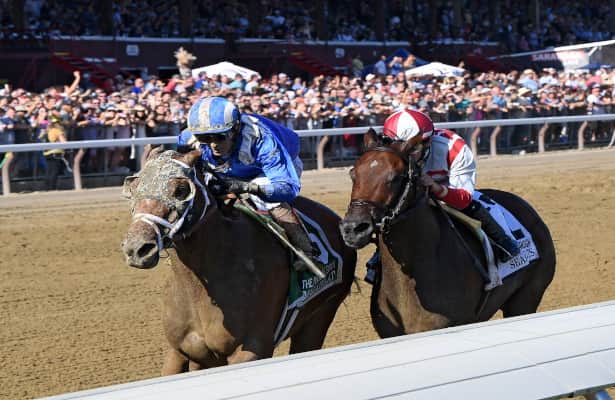 Letruska and Malathaat will clash for a fourth time as they headline a field of five fillies and mares entered for Sunday’s 67th running of the Grade 1, $600,000 Spinster going 1 1/8 miles on Keeneland's main track.

Trained by Fausto Gutierrez, Letruska will be bidding to become the fifth horse to win the Spinster in back-to-back years. The most recent was Blue Prize in 2018-19.

Letruska, who is 2-for-4 this year, in her most recent race was third behind Malathaat in the Personal Ensign (G1) at the 1 1/8-mile distance. Tyler Gaffalione has the mount on Letruska in the Spinster and will break from post position 3.

Malathaat, who also finished in front of Letruska in last year’s Breeders’ Cup Distaff as well as in the Ogden Phipps (G1), is perfect in two starts at Keeneland, winning the Ashland (G1) in 2021 and opening her 2022 campaign with a victory in the Doubledogdare (G3). Trained by four-time Spinster winner Todd Pletcher, Malathaat will break from post position 9 and will be ridden by John Velasquez.

Stepping back into Grade 1 company is Played Hard.

Trained by Phil Bauer, Played Hard comes into the Spinster off a 5 3/4-length victory in the Locust Grove (G3) at Churchill Downs on Sept. 17. In her previous Grade 1 test, Played Hard finished fifth behind Malathaat in last year’s Alabama at Saratoga.

Joel Rosario has the mount on Played Hard and will break from post position 4.

Third in the Alabama and Cotillion last year, Army Wife is 1-for-4 in 2022 for trainer Mike Maker. Luis Saez has the mount Sunday and will break from post position 2.

*Rating is based on HRN fan votes, which rank the Top Active Horses in training.
Letruska Malathaat Keeneland Spinster Spinster (2022)