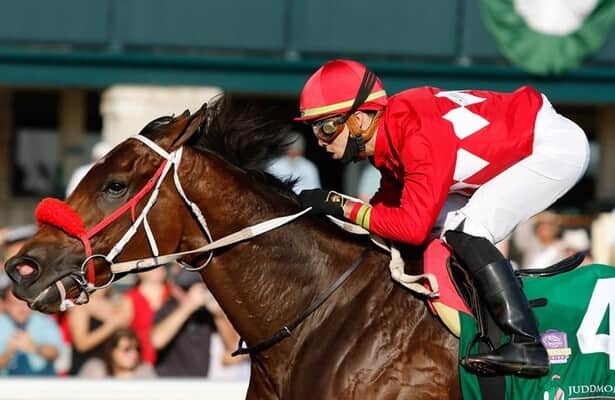 On Wednesday, Horse Racing Nation provided a closer look at 15 of the top older male horses set to return in 2022. Now the distaff set takes the spotlight. This year racing fans will be treated with the returns of the presumed champions of 2021 in two female dirt divisions: Letruska (older female) and Malathaat (3-year-old filly). Add to the mix the returns of the top-two finishers in the Breeders' Cup Filly & Mare Sprint, Ce Ce and Edgeway, along with the top female turf horse from a season ago, War Like Goddess, and there is plenty to be excited about for the new year. Here are 15 of the top females returning in 2022: Letruska. The sure-fire champion older dirt female of 2021 will be back as a 6-year-old for trainer Fausto Gutierrez and owner-breeder St. George Stable. Her major early-season goal is an attempted repeat in the $1 million Apple Blossom (G1) at Oaklawn Park on April 23. In last year's Apple Blossom, the Super Saver mare prevailed by a nose over multiple champion Monomoy Girl.

Malathaat. The de-facto champion 3-year-old filly won three Grade 1s last year (Ashland, Kentucky Oaks, Alabama) and was third in the Breeders’ Cup Distaff to close out the season. The daughter of Curlin out of Grade 1 winner Dreaming of Julia is currently on a winter break for trainer Todd Pletcher and Shadwell Stable. Shedaresthedevil. She is returning as a 5-year-old for Cox following a 2021 campaign that included wins in the Clement Hirsch (G1), La Troienne (G1), Azeri (G2) and Locust Grove (G3). The Daredevil mare, who also won the 2019 Kentucky Oaks, is expected to again target the Azeri and/or the Apple Blossom at Oaklawn Park. Clairiere. Competing strictly in Grade 1 and Grade 2 competition a season ago, she finished in the top four in all eight starts with wins coming in the Rachel Alexandra (G2) in the winter and Cotillion (G1) in the fall. The daughter of Curlin out of multiple Grade 1 winner Cavorting has been on break since finishing fourth in the Breeders’ Cup Distaff for trainer Steve Asmussen and owner Stonestreet Stable. Bonny South. The Juddmonte Farms’ homebred will return as a 5-year-old, trainer Brad Cox confirmed to Horse Racing Nation on Thursday. By Munnings, Bonny South won the Doubledogdare (G3) at Keeneland last spring and went on to hit the board in three Grade 1s. She was second in both the Personal Ensign (G1) and Ogden Phipps (G1) and third in the Spinster (G1). She closed out the campaign with another runner-up finish in the Falls City (G2) at Churchill Downs. Ce Ce. A multiple Grade 1 winner routing back in 2020 (Apple Blossom, Beholder Mile), the Bo Hirsch homebred was cut back to sprinting last year and promptly capped the season with a win in the Breeders’ Cup Filly & Mare Sprint. Previously, she won the Princess Rooney (G2) at Gulfstream Park and the Chillingworth (G3) at Santa Anita. The 5-year-old Elusive Quality mare is in steady training at Santa Anita. Trainer Michael McCarthy told Horse Racing Nation Thursday the $200,000 Santa Monica (G2) on Feb. 5 at Santa Anita could be her return spot. Search Results. As a 3-year-old last year, the daughter of Flatter went from a debut winner in January to a Grade 1 winner in June when taking down the June 5 Acorn for trainer Chad Brown and Klaravich Stable. Prior to that, she won the Gazelle (G3) in just her third start and was second to Malathaat in the Kentucky Oaks. Search Results has been sidelined since finishing third in the Test (G1) on Aug. 7.  Edgeway. A Grade 3 winner last year and runner-up in the Breeders’ Cup Filly & Mare Sprint for trainer John Sadler, this gal returned to action last Sunday with a dominant win in the listed Kalookan Queen at Santa Anita. Next up could be a potential Breeders' Cup rematch with Ce Ce in the Santa Monica, or possibly a return trip to Oaklawn, where last year she won the Carousel Stakes.   War Like Goddess. She emerged last year when rattling off wins in the Orchid (G3), Bewitch (G3), Glenns Falls (G2) and Flower Bowl (G1). In the Breeders’ Cup Filly & Mare Turf, the daughter of English Channel rallied to take the lead at the eighth pole, but was overtaken late to check in third. She is on a winter break for trainer Bill Mott. Going Global. She figures to be hot on the heels of War Like Goddess in the female turf division this year following a stellar sophomore campaign in 2021. The Irish-bred by Mehmas captured six graded stakes last season for trainer Phil D’Amato, including the Del Mar Oaks (G1). The only blemishes on her record since arriving in the U.S. is a second in the San Clemente (G2) and a sixth in last month’s American Oaks (G1) that was taken off the turf. Shantisara. The female turf division looks strong at the top with this Grade 1 winner for Chad Brown joining the likes of War Like Goddess and Going Global. After arriving from France as a 3-year-old last year, the Irish-bred daughter of Coulsty was second in the Boiling Springs at Monmouth Park then reeled off consecutive wins in the Pucker Up (G3) at Arlington Park, Jockey Club Oaks Invitational at Belmont Park and the Queen Elizabeth II (G1) at Keeneland. Maracuja. Upset winner of last year’s Coaching Club American Oaks (G1), the Honor Code filly recently arrived at Oaklawn Park for trainer Rob Atras to prepare for likely starts in the Azeri and/or Apple Blossom. In four other graded-stakes starts last year, she was second in the Gazelle (G3), fourth in the Cotillion (G1) and off-the-board in the Kentucky Oaks and Alabama (G1). Obligatory. The Juddmonte homebred will return for a 4-year-old campaign following a winter break, trainer Bill Mott confirmed to Horse Racing Nation this week. Last year, the gray or roan daughter of Curlin won the Eight Belles (G2) in the spring and capped off the campaign with a win in November’s Chilluki (G3) at Churchill Downs. She was also runner-up in the Acorn (G1) and Cotillion (G1). Bella Sofia. The Awesome Patriot filly had a rapid ascent as a 3-year-old last year for trainer Rudy Rodriguez. After winning her debut in May, she took down the Test (G1) three starts later and then added a win in the Gallant Bloom (G2) at Belmont Park before finishing fourth in the Breeders’ Cup Filly & Mare Sprint. She is also in the midst of a winter break. Bell’s the One. She recently returned to trainer Neil Pessin’s stable at Fair Grounds to prepare for a 6-year-old campaign, which is likely to start with the $500,000 Madison (G1) at Keeneland on April 9. Last year, the Majesticperfection mare won four stakes including the Honorable Miss (G2) at Saratoga and the Thoroughbred Club of America (G1) in the fall at Keeneland.
Malathaat Letruska