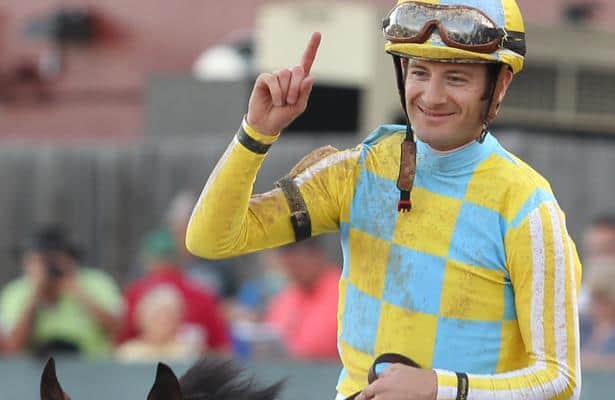 Two-time Eclipse Award-winning jockey Julien Leparoux will come into Indiana Grand on Wednesday, July 8, seeking a record fifth win in the Grade 3 $200,000 Indiana Oaks with Nancy and Mark Stanley’s Tempers Rising. He also will seek his second title in the Grade 3 $300,000 Indiana Derby aboard Winning Impression.

Leparoux is one of only four jockeys to win both stakes in the same year, having done so in 2011 with Wilburn in the Indiana Derby and Juanita in the Indiana Oaks. He is the only rider to win three straight runnings of the Indiana Oaks, coming home a winner with Family Tree in 2016, Overture in 2017 and Talk Veuve to Me in 2018.

Should Leparoux pull off the double, he’d be the first jockey to complete the Indiana Derby-Indiana Oaks parlay twice. With Dallas Stewart training both horses, he’d also become the second rider to sweep the races for the same trainer, as Martin Garcia did in 2010 on the Bob Baffert-trained Always a Princess and Preakness Stakes winner Lookin At Lucky.

Leparoux, who is riding regularly at Ellis Park for the first time after spending his summers at Saratoga for most of his career, has ridden West Point Thoroughbreds’ Winning Impression twice, including finishing fourth at 20-1 odds in the May 2 Arkansas Derby in the gelding’s last start. Of the three horses that beat Winning Impression, victorious Charlatan and third-place Gouverneur Morris are sidelined. Runner-up Basin is running in Keeneland’s Toyota Blue Grass.

“He ran a good race,” Leparoux said of Winning Impression’s Arkansas Derby, which helped make the gelding the Indiana Derby’s 3-1 favorite. “Obviously he hasn’t run since. But he’s got a big chance. He ran a big race over there. Hopefully we can get it done over there in Indiana.”

A daughter of 2014 Breeders’ Cup Classic winner Bayern, Tempers Rising is a good horse to bet in the exacta, with a win, three seconds and a third in seven starts at or about the Indiana Oaks’ 1 1/16-mile distance. The exception is a seventh-place finish in a Churchill Downs allowance in her last start.

“But for the last race, she’s been very consistent for me,” Leparoux said of the Indiana Oak’s 10-1 shot. “I think the last race is a throwout, hopefully anyway. But she was running very good at the Fair Grounds this winter, running second in a stakes over there.”

A total of six stakes will be featured on the card, bringing purses for the day to nearly $1 million. Spectators will be allowed to attend in accordance with State of Indiana and Indiana Horse Racing Commission guidelines. Reduced capacity for attendance will be in place and all guests are strongly encouraged to wear face masks in all locations. Face masks are required while indoors except for guests who are consuming food or beverages.

Barn Tour: Motion on what's next for Mean Mary, other stars
When Mean Mary won by a nose in the New York Stake...