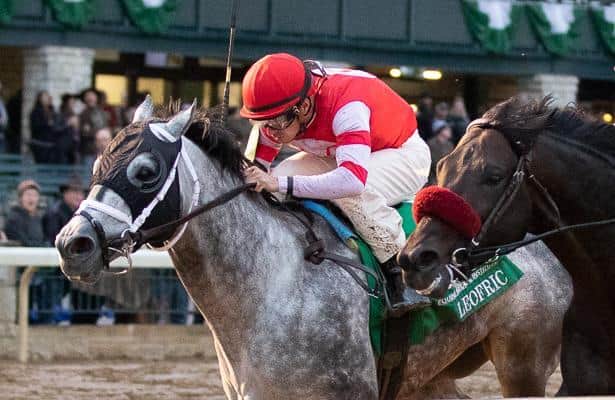 The late money went to Leofric, and the 5-year-old son of Candy Ride responded by doing the best late running as well in Keeneland’s closing day feature, getting up by a head over Prime Attraction in the Grade 2, $200,000 Fayette Stakes.

Trained by Brad Cox, and with Florent Geroux in the irons, Leofric sat just off the pace-setting Prime Attraction most of the way in the 1 1/8-mile race until pulling beside him to open the stretch drive. The West Coast invader Prime Attraction battled gamely on the inside until Leofric edged past at the wire.

"My horse is not really a front-runner," said Geroux, who rode Leofric to a final time of 1:49.87 on a track rated muddy. "He can be when he wants to. He's very tactical. He broke really sharp and put me in the right spot right away. From there I just nursed him all the way around, and he showed us some heart and a lot of fight down the stretch."

Hence rallied from last, well behind up the back stretch, to finish third.

This race indicated another step back for Hofburg, the well-regarded 3-year-old who took on older horses for the first time. He went three-wide into the first turn to establish positions but spun his wheels, finishing sixth of seven as the 8-5 co-favorite with Leofric.

Hofburg had run over an off track, but it was a new experience for Prime Attraction, who should target Churchill Downs' Clark Handicap (G1) next.

"I was hoping it would dry out," said trainer Jim Cassidy. "Kent (Desormeaux) rode a perfect race. That is the way he has to be ridden. He tries; he doesn’t give up. Two or three times the winner came to him trying to get by, but that last part he was really tired."

The winner entered off a third-place finish in Saratoga’s Woodward (G1), which has now produced five next-out victors. Note that both Yoshida and Gunnevera are Breeders' Cup Classic-bound out of the same heat.

"He's a horse that, obviously, has gotten better with age," said Cox, who took over training duties for Leofric after three losses to open his career. Since then, the horse has won seven of 10. "...He's a hard-trying horse. He gives you what he's got every time. You can look at the PPs and see that.

"We gave him a little break after the Woodward. He ran a tremendous race that day -- ran a winning race -- and just came up a little short. He deserved to be backed off of a little bit, and he rewarded us today."