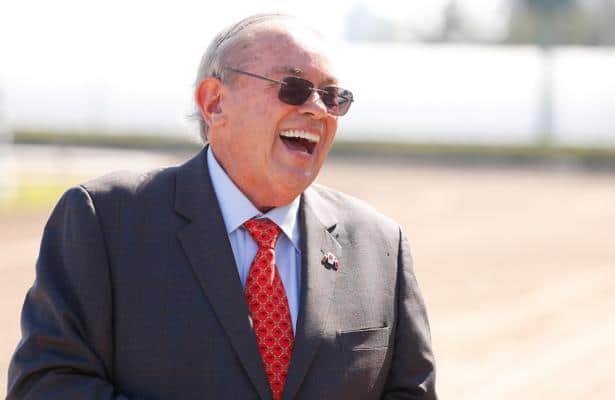 Ken Ramsey, whose aggressiveness at the claiming box and elsewhere allowed him to become the winningest owner in Kentucky history, is taking a step back. Way back.

Ramsey and his wife, Sarah, intend to dramatically reduce an already slimmed-down 400-horse operation that includes 102 broodmares and 68 foals in order to develop a laser focus on two goals they are racing against time to achieve: winning the Kentucky Derby and securing a Royal Ascot stakes victory.

“2020 will probably be the last time I win an owners title,” Ramsey said, “because we’re definitely heading in the other direction.”

Earlier this year, Ramsey, 84, was leading owner for Gulfstream Park’s Championship Meet and for the winter-spring meet at Turfway Park. The latter was his 17th such title at the Florence, Ky., track.

In another measure of his domination, on May 24 he celebrated his 500th victory at Churchill Downs, where he has won a mind-boggling 32 owners’ titles. Spanned, a 5-year-old gelding running for a $40,000 claiming tag, allowed Ramsey to achieve No. 500 when he sped to victory in a mile-and-a-sixteenth turf race that day beneath the famed Twin Spires.  Overbrook Farm ranks second at Churchill with 206 victories overall.

Although Ramsey has relished his prolonged stay at the top, family members have finally persuaded him to rein in an unwieldy operation that had grown to approximately 780 Thoroughbreds at its height. Nolan Ramsey, 23, a grandson who is an assistant to well-respected trainer Mike Maker, is among those who successfully lobbied for a dramatic reduction of stock.

“He’s always said he wants to be quality, not quantity. I think in the last year and a half he’s actually lived by that,” Nolan said. “The numbers are starting to drop. There are not so many claimers, more allowance and stakes horses.”

The elder Ramsey has been conspicuous in his absence from the claiming box. He vows to continue to downsize and said plans are being made to offer all 68 of this year’s homebreds, even if some of them are by exciting sires such as Pioneerof the Nile, Tapit, Arrogate and Gun Runner.

“We’re going to put all of them in sales and if they don’t bring the reserves I want, we’ll bring them back home and race them,” he said.

Nolan continues to urge his grandfather to be much more of a seller than a buyer.

“He’s just got to be committed to those two races alone. I don’t think he’s at the stage right now where he can focus on owners titles and claiming horses and all that and still have the Derby and a Royal Ascot stakes win on the table.”

If Ramsey never won another race, he and Sarah have made an indelible mark. They earned four Eclipse Awards as owners, two as leading breeders. They own four Breeders’ Cup victories. They brought home one of the sport’s grandest international prizes when Roses in May scored in the 2005 Dubai World Cup.

Still, Ramsey has been unable to win or come close in the Kentucky Derby. Ten Cents A Shine provided his best finish when he ran eighth in the 2003 Run for the Roses. Nolan’s Kitten supplied his best result in a Triple Crown race, securing third in the 2005 Belmont Stakes.

He emphasized that slashing his stable size should not be interpreted as a sign that he is preparing to exit the industry. He vowed to be active at sales as a very selective buyer of prospects bred for classic distances.

The octogenarian is also fending off the aging process as well as any man can, saying, “I don’t drink. I don’t smoke. I don’t chase wild women.”