Lead changes in horse racing: What you need to know 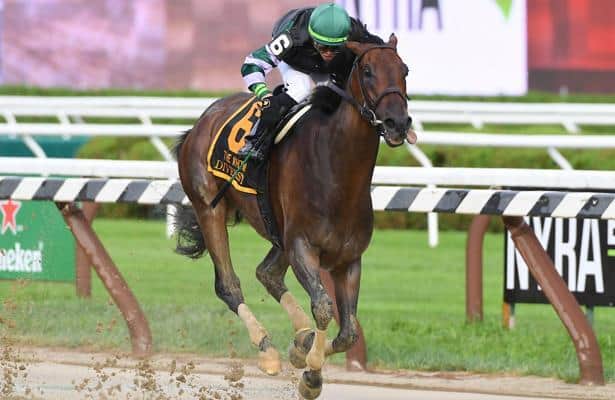 A horse’s ability to change leads while racing at full speed is a fascinating topic. It's an aspect of horse racing that avid fans and handicappers can view with common interest. They intuitively know a quality lead change is important, but most are unsure precisely why.

For newcomers to racing who may not know what a lead change is, it is simply the act of horse switching which leg he or she will reach farther forward with in stride. It is crucial to race on an inside lead through the turns because it maintains balance as the forces of physics work against the body of the horse. In North America, horses race counter clockwise, and the great majority are on their left lead while in the turns. By default, they are taught switch to their right lead while in the front and backstretch.

Consider this analogy: If you’re rushing through the airport with a heavy suitcase in your right hand, switching to the left provides a quick boost, even if your dominant hand isn’t the left. Back to the racetrack, most runners will make a lead change when they hit the straight, oftentimes with a suggestion from their rider.

A failure to change leads efficiently or effectively can come from a few different factors:

1. A weak mind. This includes the inability to learn the training, and reverting to the security of a preferred left lead. Some horses with a weak mind will change leads while in the clear, but a pressured situation such as being around other horses or increasing fatigue won't allow them the confidence to pull off the maneuver at full speed.

2. Poor conformation. Their body simply won't allow it at top speed based on their physical makeup.

3. Injury. Sometimes a horse has an underlying issue, and a lead change will put more pressure on the injured limb or area.

A horse that completes a quality lead change under intense racing situations usually has a certain amount of confidence, health and athleticism.

All of this visual analysis does not take into account what can happen in the first three to five races in a horse’s career. Vast changes can and do happen in that window of development. Trainer changes, physical maturity and different jockeys to a lesser extent can also have an impact.

After countless hours of race review, I think the importance of a lead change has a greater impact in dirt racing. The theory is that dirt races are conducted in a grueling manner of deceleration. They are essentially battles of attrition. Most turf races are run with a slower early pace and an explosion in the final few furlongs. It would make sense that if the early fractions in turf races require less energy, then a horse could finish on the same lead with a stronger kick.

Lead changes can be crucial assessing a horse’s potential. Take Bayern for example. As an early 2-year-old he produced this workout:

A lead change happens in an instant and can be difficult to see. At about 12 seconds in the video https://www.horseracingnation.com/content/Alcoholism_Its_Negative_Impact_To_Sports, Bayern completes what is considered a breathtaking lead change. Great lead changes are almost an illusion, and Bayern on this day was a master magician. His right leg on the first stride is similar to a Clayton Kershaw overhand curveball in power, motion and efficiency. He receives a noticeable boost in stride length and efficiency after the lead change.

In a second, it tells an entire story about Bayern's abilities in training, confidence, athleticism and his conformation. It was a short workout, so one might not know the breadth of fatigue. And without the pressure from other horses, it may have been easier to change lead. This piece of information is one piece of the puzzle in assessing his off-the-charts maximum potential. It is no mistake that from a very modest pedigree, he fetched $320,000 at public auction shortly after this audition.

Some horses are able to win significant races while staying on the left lead the entire race. Although a daily occurrence, it is not optimal and limits their potential. The epitome of this exact concept is minor stakes performer Clearly Now. He is a very accomplished Grade 3 winner with strong speed figures that suggest he is fast enough to win a Grade 1 event. But each time he tried those higher levels though he wasn't close to winning, often at low odds. Clearly Now had an ineffective lead change and oftentimes wouldn't change leads at all. When he did, he had a poor stride while on his right lead. Horses that don't change leads can often times dominate horses that are inferior to them, but when they are on equal footing facing well-matched or top class opponents, it can expose them.

The classic case of a horse that didn't reach his potential in part because of a lead change issue is Alydar. One of the traits Alydar is most known for is his inability to change leads in the stretch. Interestingly, his arch-rival Affirmed didn't change leads either in his Kentucky Derby win. Affirmed likely learned his lesson and was able to change leads in desperately close finishes to the Preakness and Belmont. Even if the improvement from a successful lead change was minimal, the outcomes of two evenly matched stretch battles may have been different. More contemporary examples of horses that likely would have had vastly different careers with a lead change in their repertoire are the recent Triple Crown contestants Firing Line and Solomini.

Rider selection is not trivial in the equation of completing lead changes. Irad Ortiz Jr., for example, excels in getting a lead change from horses with his aggressiveness in the stretch. He is exceptional with cheaper class horses that respond well to these tactics. Recently, he won the Grade 1 Whitney aboard Diversify. In reviewing the race, the horse reacts to him on cue at the top of the stretch. Ortiz has given his first right-handed whip, and the horse responds with an effortless lead change.

After nine or more whips, while clear in the stretch, Diversify reverts to his left (wrong) lead about four strides before the wire. There are two possible reasons for this happening. The first and most likely can be observed with the experience of viewing thousands of races. The horse simply emptied his tank in the stretch and gave a maximum effort. Therefore, he needs to resort to the left lead because the right lead was exhausted. A top-class horse would prefer to go to the more fresh, left lead at this point of fatigue. Remaining on the exhausted right lead loses more speed and risks potential injury as the horse struggles to find placement of his limbs.

The second possible reason is a reaction to the infield video screen. He may have been spooked by the screen and, because he was fatigued, reacted physically in such a way that he changed leads. It's important to keep in mind, this late lead change was a reaction by the horse. The rider didn't ask for it. I'm unsure what the consensus would say about Diversify's performance, but my opinion is that he was asked for everything he had and he left it all out there on the track. As a top-class horse, he is flush with grit and determination and it showed. You can draw your own conclusions about what that means for his future performances.

Two similar examples of changing to the wrong lead late in a race can be found in recent 3-year-old classic races.

In 2016, Cathryn Sophia won the Kentucky Oaks with a similar race to Diversify's Whitney. Although she was near the lead, not on it, the filly finished with a tiring open length lead. About two jumps before the wire, she reverts to her left (wrong) lead without being asked, a sign that she reached her limit. This is not said to diminish her performance. She simply gave her maximal effort this day.

Shortly over month later, Cathryn Sophia was a well-beaten third at odds on in the Grade 1 Acorn. Three months later she dominated hopelessly overmatched rivals in a listed stakes at Parx in preparation for the Cotillion. In the Cotillion she finished a non-threatening third and was retired shortly after. And after her dominant Kentucky Oaks, it surely could be argued it was a maximum effort and without a sufficient break that caused sub optimal performances. It could also be argued that she simply stopped developing while other 3-years-olds, specifically Carina Mia and Songbird, simply surpassed her in development.

The 2014 Kentucky Derby for most fans and handicappers was a celebration of California Chrome defying the odds and winning for a one-horse owner/breeder and a virtually unknown trainer. For me, it was much more about the forgotten second place finisher, Commanding Curve. Based on his closing style, I had significant bets on him underneath and was in line to win a contest if he hit the board.  My thinking was, he could pass most of the tired frontrunners late in the race and finish in second or third.

It worked out, and watching the replay still shows he gave it his all. He switches leads perfectly at the top of the stretch, but it is tough to see in the 20-horse field. Five strides before the wire he does exactly what the previous two examples are guilty of, switching to the wrong lead without being asked. Commanding Curve was never expected to have an exemplary career, even after a second-place finish in the Kentucky Derby. What happened after that race, though, is nearly as unexpected. In nine races following the Kentucky Derby, he finished with just one win and eight off-the-board finishes. The lone victory came in an allowance race.

Diversify is an older horse than the other two examples when they produced a max effort race. He likely has a more developed foundation as a 5-year-old to be able to handle this type of exertion. It is probable, however, that the next few races won’t compare to his Whitney performance, especially if he returns to race in a short timeframe.

Changing leads efficiently and effectively matters. It also factors when a horse reverts back to the left lead late in the race. To what extent is a matter for debate. Lead changes tell a story in a blink of an eye that can't be explained in an entire chapter of a book. And maybe that’s that is the reason they are so difficult to detect.