Lazy Daisy's Fantasy Stakes try 'something to build on' 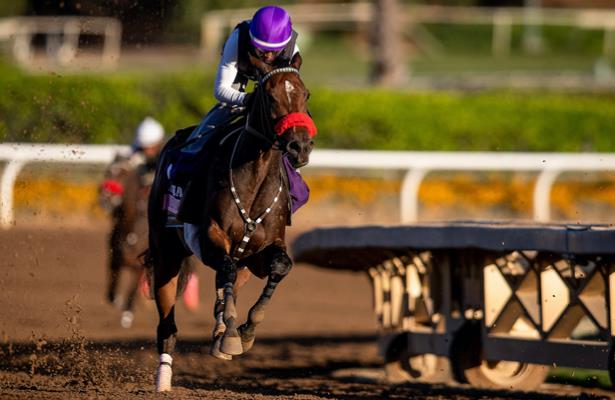 But with limited options, he decided to take a chance in Friday’s Fantasy Stakes (G3) at Oaklawn Park.

The 3-year-old Paynter filly hasn’t started since finishing sixth behind British Idiom with a troubled trip in the Breeders’ Cup Juvenile Fillies last November. One race earlier, she won the Pocahontas Stakes (G2) at Churchill Downs.

“It’s obviously a really difficult spot, but she’s a hard-knocking filly and there wasn’t a lot of options for her,” O’Neill said. “She is training well, but at the same time we are all realistic and think that if she could split the field or better, that would be a gift and we’d be grateful that because it will give us something to build on.

"We are throwing her into the deep end for sure.”

Lazy Daisy arrived at Oaklawn in early April and has had three works over the track, including a half mile breeze from the gate in :48 1/5 April 25.

“According to the boys in the barn, they are extremely happy with her,” O’Neill said. “She’s eating well. Her appetite is good and her energy is good. We took her to the gate for the last work since she hasn’t run in a while just to put the gate back in her mind. She broke well and worked full of energy. (Jockey) David Cohen breezed her that day and said that when he went to pull her up, she wanted to take off again. We’re pumped and happy that she’s back, race ready. We’re looking forward to seeing her compete again.”

“I think ideally, good clean break and settle her. When they have been off and are fresh, if you ask for too much early, they won’t finish. It’s just not physically possible. We’re just going to try and save as much ground as possible and try to use her energy finishing up. If we get a productive effort, we’re all going to be happy with that.

This marks the third straight year that O’Neill has had a string at Oaklawn. The trainer said he expects to return again in 2021.

"With no racing in California, it’s been a dream come true to still have the ability to compete during this unusual time of the pandemic. I would say we’d be back next year. There are just so many opportunities there. I love the town and it makes you proud to be part of the racing in Hot Springs.”

*Rating is based on HRN fan votes, which rank the Top Active Horses in training.
Lazy Daisy