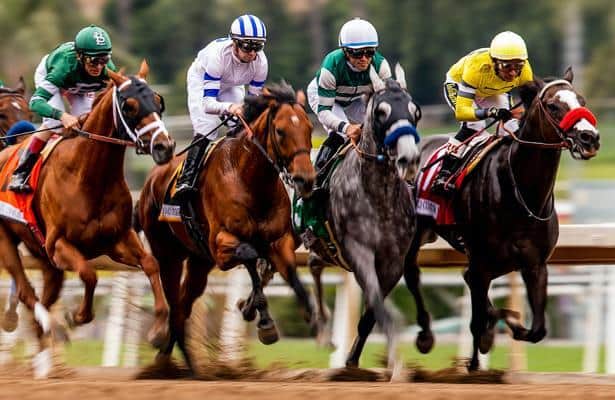 An owner who filed a lawsuit last month against Santa Anita Park alleging a track veterinarian scratched his horse as part of a “facade” to promote equine safety submitted an amended complaint saying the Arcadia, Calif., facility is unfairly targeting shippers.

George Sharp, whose League of Shadows was ruled out of the Jan. 18 California Cup Sprint at the gate by veterinarian Dana Stead, wrote in his updated filing that “the defendants tend to apply the practice of arbitrarily scratching horses…in a disproportionate and unfair manner to horses which are not permanently stabled at Santa Anita.”

Sharp served the track his amended complaint — filed in the Superior Court of California in Los Angeles — this week. In the interim, Sharp wrote in an email to Horse Racing Nation, he “offered to discuss some ideas I have that would be fairer to the horsemen while maintaining the paramount importance of the horse's welfare.” The track did not respond.

Sharp's lawsuit seeks damages in the range of $90,000 — the winner’s share of the California Cup Sprint purse — and notes expenses such as the $700 cost of shipping League of Shadows from Turf Paradise in Arizona to Santa Anita. That’s along with flights, meals and procuring jockey Rueben Fuentes’ services.

Since the Kerri Raven-trained League of Shadows came off the vet’s list following the scratch, the 6-year-old Gotham City gelding has raced twice. On Feb. 8, he ran sixth in open company in Turf Paradise’s Phoenix Gold Cup Handicap. More recently, League of Shadows was second in a Feb. 23 allowance race.

“This was accomplished without any medical care since the scratch,” Sharp said in an email.

He planned to propose to Santa Anita having two vets at the gate, where it was before the California Cup Sprint his League of Shadows was scratched to the "dismay" of jockey Fuentes, according to the lawsuit.

Sharp approached the Santa Anita vet, Stead, after the race, which Fashionably Fast won by a neck over Lieutenant Dan. Stead told the owner he observed League of Shadows “off” in his right front and hind end. Two subsequent examinations by private veterinarians showed League of Shadows to be “fit for racing,” according to the original filing.

Sharp would like to see in the future a pair of vets, one employed by horsemen, come to a consensus at the gate to scratch a horse — and only after the jockey dismounts for an examination to occur.

“The vet who merely looks at a horse does not understand the animal like the trainer does and especially not like the jockey who is sitting on him does,” Sharp wrote in his email. “Why would a jockey jeopardize his own wellbeing? Furthermore, the track vet has already shown that he is not infallible, as horses he does allow to enter the gate break down during races anyway. In other words, just as there are horses who enter the gate when they shouldn't, it is plausible that horses who are scratched at the gate are done so with no reason, as was League of Shadows.

“The decision is being made by one person under time pressures who needs to review six to 12 horses. Furthermore, the vet at the gate works for the track, so he is under pressure to get it right from his employer and is probably more apt to incorrectly scratch a horse in an overabundance of caution.”

Sharp’s allegation that shippers were the target of Santa Anita’s vets came, according to the lawsuit, as a result of information he received that the track “systematically committed these acts of fraud against other horsemen.”