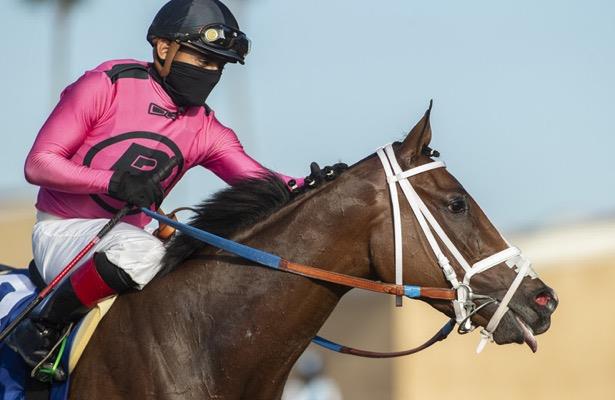 Eleven 3-year-old fillies will test their mettle over nine furlongs on the Del Mar turf course Saturday in the Grade 1 Del Mar Oaks, a key race on a five-stakes program offering more than $1 million in purse money at the seaside oval.

The $250,000 Oaks, which starts out of the diagonal infield chute, will have its 64th running with 11 distaff sophomores in the lineup. It goes as race No. 9 on the 11-race card.

The likely favorite in the highly sought lawn test is Gary Barber’s Laura’s Light, a daughter of Constitution who has won five of her seven lifetime starts, including a last-out tally at one mile in Del Mar’s San Clemente Stakes on grass July 25, a race considered the key prep for the Del Mar Oaks. Trainer Peter Miller’s bay filly was ridden that day by Abel Cedillo and the Guatemalan jockey is back aboard Saturday. They’ll break from Post 10 and carry 122 pounds, just as all runners in the race do.

Here’s the complete field for the Oaks from the rail out with riders and morning line odds:

Chief threats to Laura’s Light are a pair of French fillies who’ll be making their U.S. debuts in the nine-panel showdown. Miss Extra, a bay by Masterstroke, last raced July 5 at Chantilly, the French racecourse about 30 miles north of Paris. The bay has won three of her four starts this year, including the Prix de Sandringham (G2) at Chantilly on June 18 at a mile on turf. Trainer Richard Mandella is listed as her conditioner for the Oaks.

Neige Blanche is in the barn of the American-based, French-born trainer Leonard Powell. Her last outing was on June 6 at Lyon-Parilly near Lyon in the central part of France. She won the Prix Cleopatre (G3) that day, her third victory in her sixth lifetime start.

Powell also trains Guitty, who was second to Laura’s Light in the San Clemente after having to take the overland for the last three-eighths of a mile. She shows two wins and two seconds from eight lifetime outings.

Warren’s Showtime had a taste of bad racing luck in the stretch in finishing third in the San Clemente. The chestnut homebred by Clubhouse Ride has won five of 11 races and has earnings of $430,251. She won four minor stakes and will be making her first Grade I appearance Saturday.