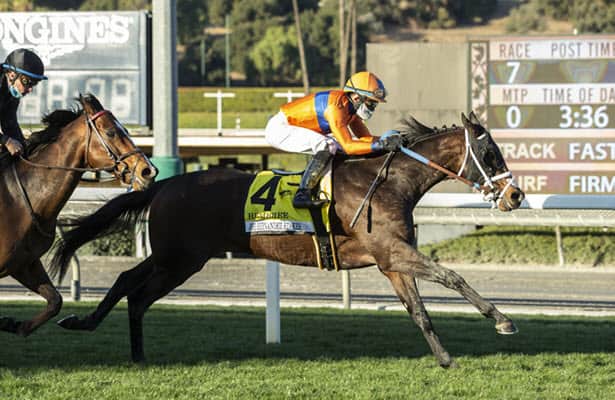 Fresh off a Grade 2 win sprinting and in the money in 26 out of 40 lifetime starts, Tom Kagele’s 7-year-old Hembree heads a field of eight older horses going one mile on turf in Saturday’s Grade 3, $100,000 Thunder Road Stakes at Santa Anita.

Claimed for $62,500 out of a one-turn mile win two starts back on Nov. 19 at Churchill Downs, Hembree rallied for an authoritative 3/4-length score going 6 1/2 furlongs on turf in the Joe Hernandez Stakes (G2) here on Jan. 1. Trained by Peter Miller, Hembree, a two-time graded winner, is a full horse by Proud Citizen, out of the Langfuhr mare Knockatrina.

Miller’s “Avis Choice” is Sombeyay, who comes off a front-running 1 1/4-length allowance win on Jan. 15 as the 4-5 favorite under Flavien Prat, who appears to have opted for Border Town. Originally trained by Todd Pletcher, Sombeyay will be making his third start for Miller as he seeks his third graded stakes win. Owned by Swifty Farms Inc., Sombeyay, a 5-year-old horse by Into Mischief, is 15: 4-5-0 overall and will be ridden for the first time by Juan Hernandez.

Trained by Richard Mandella, Border Town comes off what appeared to be his best career race on Jan. 8, as he rallied from off the pace to take a one-mile allowance by half a length under regular rider Prat. Owned by Ramona Bass and Perry Bass III, Border Town, a 5-year-old gelding by War Front, seeks his first graded stakes win in what will be his 12th start.

Trainer Dan Blacker’s comebacking Hit the Road, who seeks his third consecutive win, lends further depth to the Thunder Road party. Idle since taking the restricted Oceanside Stakes at one mile on turf July 10 at Del Mar, Hit the Road was also a minor stakes winner going a mile on grass at Santa Anita in his third career start on Oct. 6, 2019. Owned by D K Racing LLC and Radley Equine Inc., Hit the Road, a 4-year-old colt by More Than Ready, would relish a fast pace with regular rider Umberto Rispoli up.