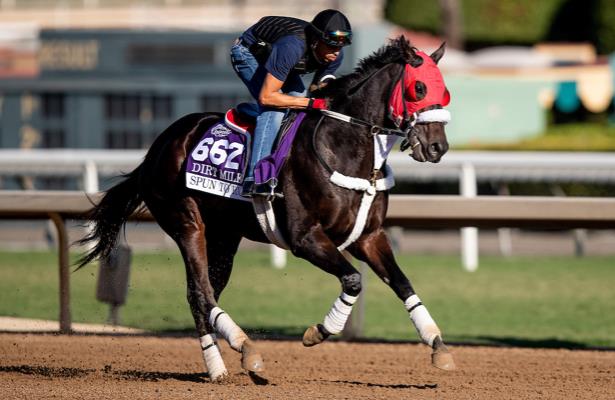 Carlos Guerrero keeps intending to give Spun to Run time away from the track, but the 3-year-old continues showing his trainer no signs of needing it.

The Hard Spun colt returned to the work tab Friday morning at Florida’s Palm Meadows training center with a swift, 47.90-second half-mile breeze that put him under consideration for the Pegasus World Cup (G1).

Guerrero said he worked Spun to Run without Lasix — the anti-bleeding medication will be banned for the $3 million race on Jan. 25 at Gulfstream Park — and everything “came back clean.”

“That was one of the main concerns,” Guerrero added. “If he bled in the workout, what’s going to happen in the race?”

In his most-recent start, Spun to Run then ran second throughout the Cigar Mile (G1) to Maximum Security. That colt will pass on the Pegasus in light of its purse cut from $9 million to target the inaugural $20 million Saudi Cup on Feb. 29.

In addition to the purse and medication changes to the Pegasus, The Stronach Group, which owns and operates Gulfstream Park, also dashed the lucrative race's entry fee, making it a more attractive opportunity for a number of connections.

While Guerrero directed much of Spun to Run’s December training in person, he headed home before Christmas to Pennsylvania’s Parx Racing, where his family and the rest of his string operates. He shares a Palm Meadows barn with fellow trainer Jorge Duarte, who oversaw Friday’s work.

“Today he called me right away,” Guerrero said of Duarte. “He said he looked like he was going fast. I said, ‘No, that’s just how he likes to go.’”

Spun to Run looked super this morning in 35.3, 47.4 and 100 flat to mile pole, galloper out on own all the way to the 3/8ths for full ten furlongs. Amazing what happens when horses are allowed to use their speed and not asked to act like turf horses

In all, Spun to Run has made six starts in as many months since returning from his last bit of extended time off. Earlier in 2019, he underwent surgery to repair a breathing issue that counted him out of the Triple Crown series.

Rather than undergo a traditional freshening this winter, Spun to Run is enjoying more benefits of a change in scenery from Parx to south Florida.

“When I took him to the Breeders’ Cup, he was so relaxed out there,” Guerrero said. “He’d just look at the mountains. The warm weather hits him really good.

“(At Palm Meadows), he walks around outside the barn — he can graze, relax, everything. Back home, over here, he just doesn’t do that at all. Maybe he’s trying to tell me, ‘Take me out of here for a while.’”