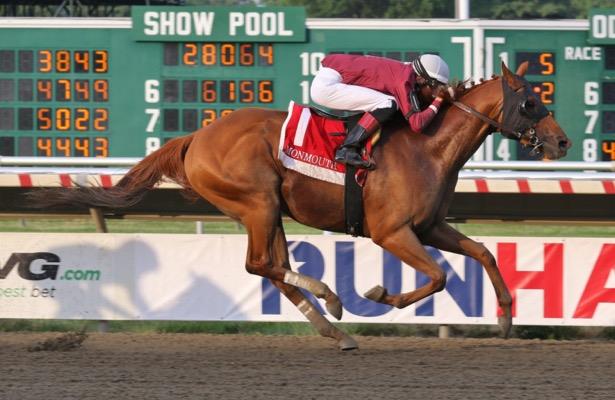 Laki shook off an eight-month layoff, taking full advantage of an early speed duel that developed in front of him, before drawing off to a 2½-length victory in the first running of the Oceanport Centennial Stakes as racing fans welcomed back Monmouth Park with a rousing reception at the betting windows on opening day of the COVID-19 delayed meet.

Despite attendance restrictions under guidelines issued by the state in the ongoing battle against the pandemic, bettors wagered $3,422,830 from all sources on the six-race twilight card.

Average handle for Fridays a year ago was approximately $2.5 million, when a typical card saw eight live events.

“We’re happy and grateful that the day went off without a hitch,” said Dennis Drazin, Chairman and CEO of Darby Development LLC, operators of the racetrack. “It was a great racing card that was whole-heartedly endorsed by the betting public.

“It was an encouraging start to a year that could certainly use some positive news.”

“He’s been training so well coming into the race,” trainer Damon Dilodovico said. “I’m not surprised by this, even after eight months off.

“Toward the end of the year last year he just needed to be freshened. We weren’t looking for the COVID-19 sized freshener but maybe it ended up helping him.

“I was surprised to see him in front early amongst those horses because there was a lot of speed in the race. Trevor just let him do his thing and sat off a good speed duel. That’s really where he is more comfortable.”

Though Laki broke to the lead from the rail in a field of speedsters, McCarthy eventually settled the 7-year-old gelding behind dueling leaders Chateau and Awesome Anywhere. Laki powered by both in mid-stretch, finishing the five furlongs in :57.62.

Laki paid $13 to win, with Awesome Anywhere holding second, 5¾ lengths ahead of Midtowncharlybrown.

“Damon kind of left it up to me,” McCarthy said. “I thought the five-eighths might be a little short for him. That was my biggest worry. I just tried to break him as sharp as I could break him just to get position. I couldn’t believe I broke in front of everybody. I kind of just sat there, let him get himself together and let the other guys go at it after he settled in.

“We got to sit off a nice hot speed duel. He usually finishes good. He showed his true class.”