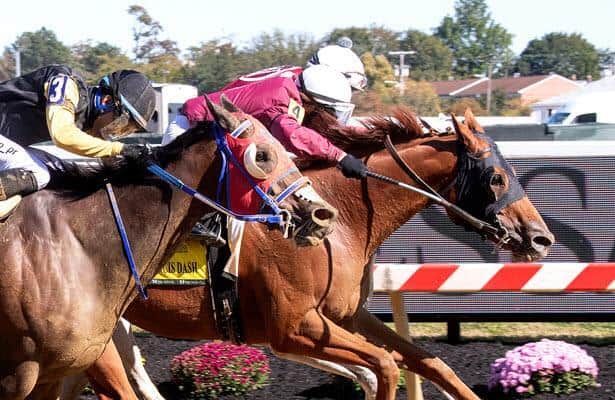 Laki emerged from a mad scramble in deep stretch with a nose down on the wire to win a three-way photo and score a 7-1 upset in Saturday's Grade 2, $300,000 DeFrancis Dash at Pimlico Race Course.

Laki and jockey Horacio Karamanos sat well off a pace of :22.96 and :45.03 for the opening half mile set by Krysto Sky -- the longest shot on the board -- with 4-5 favorite Landeskog pressing on the outside. As the field entered the head of the stretch, emerging nearly three in a line were Krysto Sky and Landeskog joined by a rallying Nitrous. While Landeskog failed to stay on, both Laki and Eastern Bay came rolling on the outside together and in one final surge, it was Laki who emerged the winner by a nose.

Eastern Bay edge Nitrous by another nose for second with pacesetter Krysto Sky holding on to complete the superfecta. Laki, who paid $16.40, completed six furlongs on a fast track in 1:09.70.

The DeFrancis is the first graded stakes win for both Laki and trainer Damon R. Dilodovico.

"It was unbelievably exciting," Dilodovico said. "Everyone was hollering like it was a full house, like a May Preakness. It means the world to me."

“Unbelievable," added Karamanos. "This is the stable horse. I’m so happy for everybody. Laki, I really love this horse. I really love the trainer, the family. Everybody works together. I’m so happy to win for them because they support me all year round, winning many races. I’m so happy, especially for Damon. He’s a good guy and a good trainer.”

A 7-year-old gelding by the Not for Love stallion Cuba, Laki improves to 28: 10-6-5 with earnings approaching $700,000 for owner Hillside Equestrian Meadows. He has at least one stakes win each of the past four seasons. Laki added to that stakes streak July 3 when winning the Oceanport Centennial at Monmouth Park and he entered the DeFrancis off of three straight runner-up finishes at Laurel Park, including most recently the Sept. 5 Polynesian Stakes.