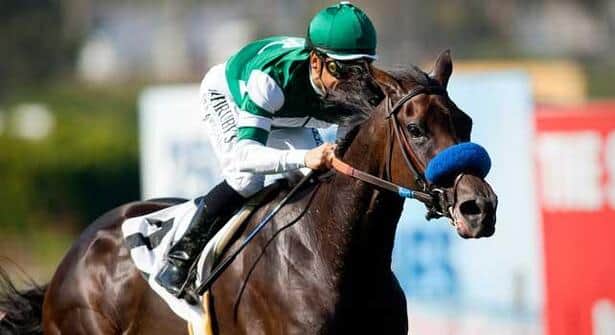 Reunited with Hall of Fame jockey Mike Smith, the 3-year-old Scat Daddy filly earned her fourth stakes win – two of them graded – in six starts since joining the barn of trainer John Sadler after being purchased privately by Hronis Racing LLC.

A first Oaks victory for Sadler was the most significant of a Saturday stakes triple – all graded – for the trainer.

Immediately after the American Oaks, Switch, the 2-1 choice, earned herself a berth in the Breeders’ Cup Filly and Mare Sprint with a come-from-behind score in the $200,000, Grade II A Gleam Handicap. These wins came after Scherer Magic, a recent $50,000 claim, had taken the $150,000, Grade III Hollywood Juvenile Championship.

Saving ground while racing behind a very slow pace set by European shipper Nayarra, Lady of Shamrock began to move forward entering the stretch, was placed in tight by Best Present Ever, who had assumed the lead under jockey Victor Espinoza, but accelerated after the pair bumped and went on to win by 1 ¼ lengths. The final time for the 1 ¼ miles on turf was 2:03.19.

“I thought at a mile and a quarter (Lady of Shamrock) would eventually get a lane or a seam,’’ said Sadler. “I’m glad (Smith) didn’t alter the strategy even though it was paceless race. We still like to settle and she’s doing really well that way. I clearly think she’s the best 3-year-old filly on turf in the country.

“In turf racing you need to catch a break, you need to find a lane and she did. She has a real good turn of foot. We are very excited about her.’’

Sadler said another Grade I – the $300,000 Del Mar Oaks Aug. 18 – is likely next for Lady of Shamrock, who was bred in Kentucky by Greendale Sales.

“She was a victim of a slow pace last time and today it worked out real great where there was a little more pace and I was able to stay in the pocket the whole way and take advantage of it,’’ said Smith, who missed the Honeymoon because he was busy finishing second with Bodemeister in the Belmont Stakes.

“I know what she is capable of, but she was a little on her toes warming up and I was a little bit concerned she might be a little aggressive today, but, honestly, she turned off real well once the gates opened and after that got into a great rhythm.’’