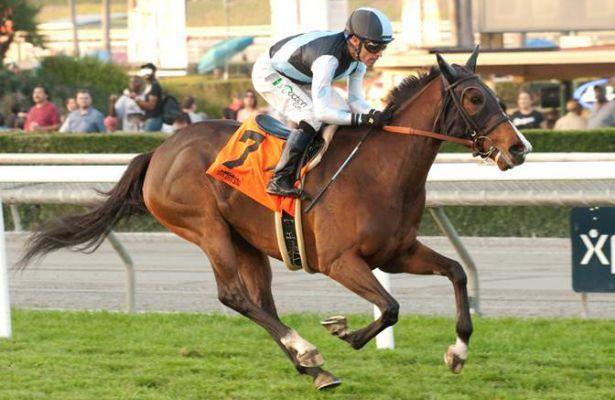 DANILOVNA: An impressive come from behind winner of her U.S. debut at Belmont Park on Sept. 22, this Graham Motion-conditioned daughter of Dansili will cut back in distance from a mile and a sixteenth on turf in what will be her fifth career start. Owned and bred in Ireland by Bjorn Nielsen, she was away slowly at Belmont and will hope to break running on Saturday with Flavien Prat engaged to ride.

LADY VALEUR: A good second two starts back in the one mile turf San Clemente Handicap on July 23, this Paddy Gallagher-trainee made the early running in the Grade I, 1 1/8 miles turf Del Mar Oaks prior to tiring and finishing ninth. Idle since, she has the look of a fresh and dangerous commodity for Eclipse Thoroughbred Partners and retains the services of leading man Rafael Bejarano. With all of her races coming on grass, she has two seconds at a mile and is 9-2-4-0 overall.

BELVOIR BAY: Owned by Team Valor International and Gary Barber, she has won three out of her four Southern California starts and seeks her third consecutive victory for trainer Pete Miller. A gate to wire winner of the Unzip Me Stakes going 6 ½ furlongs down Santa Anita’s hillside turf on Oct. 1, the English-bred has one win from three tries at a mile on turf. She is 10-5-1-0 overall.

NODIAC: Trained by Phil D’Amato, she flew from far back to be third, beaten 1 ¼ lengths by Belvoir Bay in the Unzip Me Oct. 1. Owned by Little Red Feather Racing and Marsha Naify, this Irish-bred daughter of Kodiac is 3-1-1-1 at a mile on grass and sports a 9-2-2-4 mark overall. As she did down the hill, look for her to try and exploit a fast early pace scenario.