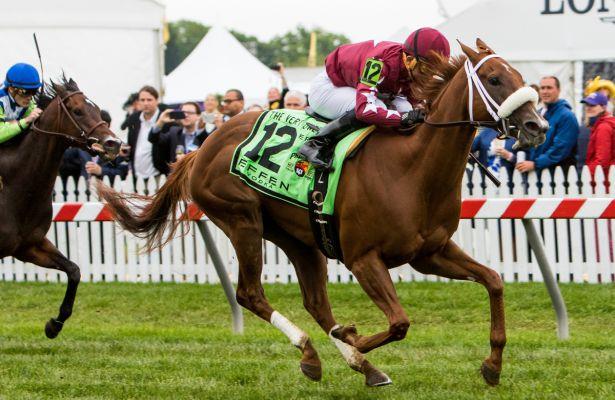 Trainer Kiaran McLaughlin’s talented Lady Shipman will take on a 10 rivals (nine of whom are males) in Friday’s Grade III, $100,000 Eddie D. Stakes, Santa Anita’s Autumn Meet opening day feature at 6 ½ furlongs down the hillside turf course.  Oversubscribed, with a total of 26 three year olds and up entered, the Eddie D. will be run in two divisions, with Lady Shipman competing in the first, which has been carded as race six.  (Each division will go with 11 runners and two horses on the Also Eligible list).

Second, beaten a neck versus males in last year’s Grade I Breeders’ Cup Turf Sprint at Keeneland, the 4-year-old Kentucky-bred filly by Midshipman will hope to use the Eddie D. as a springboard to this year’s Turf Sprint, which will be run over the course on Nov. 5.

LADY SHIPMAN:  Bred by Randall E. Lowe and owned by Ranlo Investments, LLC, she’s enjoyed another outstanding year, winning five out of seven turf sprints, including her last two.  An absolute gem of consistency, Lady Shipman is 19-13-2-2 overall, with nine of her wins coming at as many different tracks.  Quick from the gate in all but one of her starts, she has amassed earnings of $896,042.  Based most recently at Belmont Park, the Eddie D. will be her first start west of the Mississippi River.  Irad Ortiz, Jr., who has won with three out five engagements with her, will fly in from New York to ride.

Justin Squared:  Lightly raced and quick from the gate in a race that would appear to have an abundance of early lick, this Bob Baffert trainee comes off a pair of disappointing finishes in graded stakes, as he was 11th in the Grade II, seven furlong Woody Stephens on June 11 at Belmont Park and most recently, sixth in the Grade I, six furlong Bing Crosby at Del Mar July 31.  A scintillating winner of his first three starts, this 3-year-old Kentucky-bred colt by Zensational will hope to get back in the win column in his turf debut.  Owned by Zayat Stables, LLC, he’s been ridden in all five of his starts by Martin Pedroza.