Lady Rocket takes them all the way in Chicago Stakes 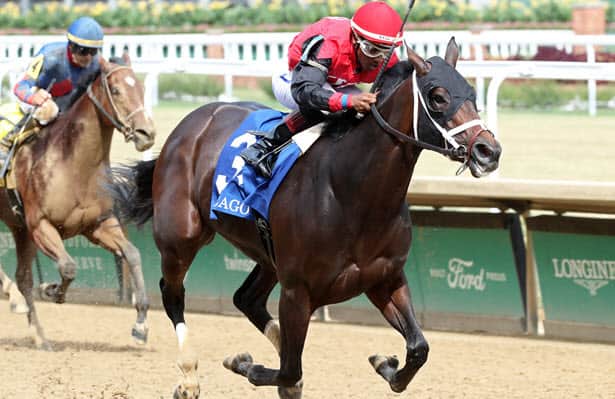 Lady Rocket went straight to the front and turned back late charges by Sconsin and Bell’s the One to win Saturday’s 32nd running of the $200,000 Chicago Stakes (G3) at Churchill Downs by 2 3/4 lengths.

This was the 5-year-old mare’s fourth stakes win and second against graded stakes company. Last fall, she won the $250,000 Go For Wand Handicap (G3) at Aqueduct by nine lengths.

(5M Tale Of The Cat - Allons Danser, by Eskendereya)

Lady Rocket, who finished third in the Ruffian (G2) at Belmont seven weeks ago, got away from the gate fast from post 3 in the field of seven fillies and mares and rattled off an opening quarter mile in :22.67 and a half-mile in :45.36 as Kalypso and Bayerness attempted to keep up.

Into the turn, Lady Rocket opened up a 1 1/2-length advantage as 2-1 favorite Sconsin, who was tracking from fourth, ranged into contention. Sconsin appeared to come within a length at the top of the stretch with a three-wide move but Lady Rocket had plenty left and spurted clear down the stretch for the win.

“We were impressed she was able to hold her speed this afternoon at seven furlongs,” Cox said. “I think she may be best at 6 ½ furlongs and Ricardo gave her a little bit of a breather up the backside and I think that helped her holding off some really nice fillies and mares that were in this field.”

“Her best weapon is her speed and she broke well from the gate and took me right to the front,” Santana Jr. said. “She relaxed on the front end and was able to save energy before the stretch. I was looking over for Corey (Lanerie) on Bell’s the One because I know he likes to come up the rail. So I wanted to make sure she didn’t sneak up on us with (Sconsin) closing on the outside. She was able to hold off everyone.”

The next target for Lady Rocket is likely the $500,000 Ballerina Handicap (G1) for fillies and mares over seven furlongs at Saratoga on Aug. 28, according to Cox.