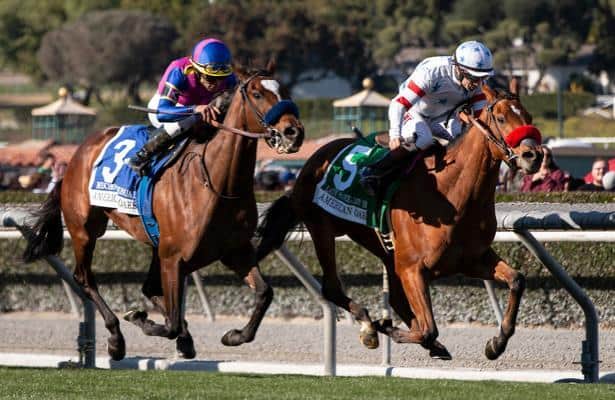 Lady Prancealot squeezed through a tight opening along the rail and outlasted Mucho Unusual in a thrilling stretch duel to win Saturday's Grade 1, $300,000 American Oaks at Santa Anita Park.

As the field spun into the stretch, Mucho Unusual and Joel Rosario passed the pacesetters and looked clear to the wire. However, Bravo and Lady Prancealot dove along the rail and squeezed through to run down Mucho Unusual in the final strides. Pretty Point checked in third and followed by Giza Goddess.

"She was so relaxed post break, so turned off and relaxed like she had full control over the whole race," Bravo said. "All I had to do was point her to the hole turning for home and she took me through. She made my job easy. If she was a fat horse she would have never made it.

Under the guide of jockey Joe Bravo, Lady Prancealot finds an opening up the rail to win the G1 American Oaks! pic.twitter.com/TFCMhU6q0n

The victory capped a stellar sophomore campaign for Lady Prancealot. The daughter of Sir Prancealot was exiting a win in the Grade 3 Valley View at Keeneland and earlier this year she won the Honeymoon Stakes (G3) at Santa Anita.

“This filly came over here from Europe and the first time she worked she had an issue and we gave her a bunch of time," Baltas said. "We thought we bought a bad horse but we didn’t. She has been ultra-consistent. I want to give a hats off to the guys at San Luis Rey Downs, my assistant trainer who has had her there most of the time. 'Jersey Joe' rode an awesome race and we are all happy now.”