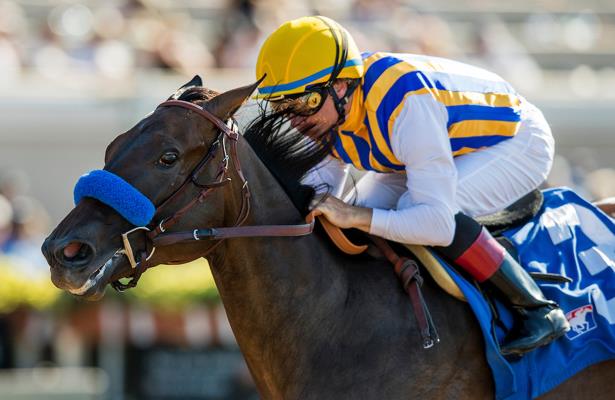 Photo: Eclipse Sportswire
Most recently third in the opening day La Brea Stakes (G1), Bob Baffert-trained Mother Mother would appear to be sitting on a big performance as she heads an evenly matched field of five older fillies and mares going 6 ½ furlongs in Sunday’s $75,000 Kalookan Queen Stakes at Santa Anita.
Fresh off the best year of her career but well beaten in the Breeders’ Cup Filly & Mare Sprint on Nov. 2, the Richard Baltas-trained Lady Ninja, a reformed claimer who took a Grade 3 stakes here two starts back, figures to be plenty tough as well.
Baffert will also be well represented by Flor de La Mar, a minor stakes winner who was well beaten as the favorite in a one mile allowance on Oct. 10.
MOTHER MOTHER
Owner: Old Bones Racing Stable, LLC, Barry Hall, Barry Lipman & Mark Mathiesen
Trainer: Bob Baffert
Third in the seven-furlong La Brea Stakes on Dec. 28, this 4-year-old Pioneerof the Nile filly had been idle since well beaten on a sloppy track in the Eight Belles Stakes (G2) going seven furlongs on May 3 at Churchill Downs. With a recent race under her belt, this $450,000 Keeneland September yearling appears poised to run a huge race with Joel Rosario back in the irons. An ungraded stakes winner at age 2, Mother Mother is 9: 2-3-2 with earnings of $315,661.
LADY NINJA
Owner: Harry Bederian, Harout Kamberian & Hagop Nakkashian
Trainer: Richard Baltas
A winner of four of her eight starts last year while in the money on seven occasions, this 6-year-old mare by Majesticperfection defeated the talented filly Selcourt by a nose here two starts back in the LA Woman Stakes (G3) at 6 ½ furlongs. Subsequently a well-beaten eighth at 22-1 in the Breeders’ Cup Filly & Mare Sprint, she lands in what appears to be a good spot for her 6-year-old bow on Sunday. Claimed for $32,000 12 starts back on Sept. 1, 2018, Lady Ninja will be reunited with Flavien Prat, who last rode her on July 18 and has guided her to a total of five wins.  With an overall mark of 23: 8-4-4, including six wins from 11 starts at Santa Anita, Lady Ninja has earnings of $331,705.
FLOR DE LA MAR
Owner: Godolphin, LLC
Trainer: Bob Baffert

Unraced at 2, this 4-year-old Tiznow filly won two out of her seven starts in 2019, including the six-furlong Beverly J. Lewis Stakes two starts back on Sept. 7 at Los Alamitos. Most recently a well-beaten fourth as the 6-5 favorite in a one-mile allowance here on Oct. 10, she brings a scintillating work tab to the Kalookan party and appears ready to run back to her early notices, which included a second place finish to Bellafina in the Santa Anita Oaks (G1) five starts back on April 6.

Here's a look at the full Kalookan Queen field with Sunday's race carded as the eighth at Santa Anita and approximate post time 7 p.m. ET.