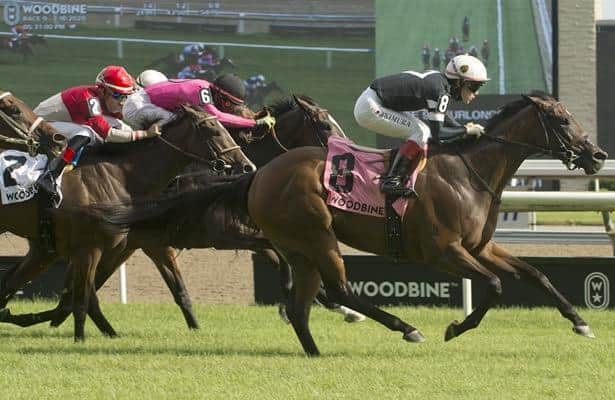 Tracy Farmer’s Lady Grace led a Mark Casse exacta worth $131.20 in the $175,000 co-feature for fillies and mares, with 11-1 shot Eyeinthesky and Patrick Husbands finishing a close second.

Making her graded stakes debut, Lady Grace settled off the pace near the back of the pack and staged a late rally between rivals to pull off the mild 6-1 upset and return $14.80 to win.

“Last time winning with her, the filly was such a nice horse,” Kimura said. “I’m not surprised today.

“Last time I went to the front, but today there were so many speed horses to the front side, I just changed my mind, sat behind, stalking from behind then she came flying today.”

The favorites were on top, led by Sister Peacock through panels of :21.91 and :43.50. Her popular stablemate Summer Sunday, Canada’s reigning Champion Female Sprinter, pressed the pace with supplemental entry Gamble’s Candy three-wide and Foxy Belle stalking along the rail.

However, the late closers stole the show. Lady Grace came flying by to prevail by three-quarters of a length with Gary Barber’s Eyeinthesky, who closed from mid-pack, edging out Bohemian Bourbon, Charmaine’s Mia and Sister Peacock for the runner-up honors.

It was 3 1/4 lengths back to Foxy Belle at the finish, with Summer Sunday and Gamble’s Candy rounding out the order.

Bred in Florida by William C. Schettine and Willian B. Haines, the four-year-old Kantharos-Smart Sis filly is a half-sister to multiple graded stakes winner Sis City.

Kimura, who was named Outstanding Apprentice Jockey in both Canada and the U.S. last year, picked up his first graded stakes victory. He was the top turf rider and won a total of 146 races in 2019 to place third in Woodbine’s overall jockey standings. While his apprenticeship ended last October, the talented reinsman sits fourth on the leaderboard with 23 wins in a close race through the first 24 race days of the current meet.

Live Thoroughbred racing continues, without spectators, on Sunday at Woodbine Racetrack with post time for the first of nine races set for 1 p.m.