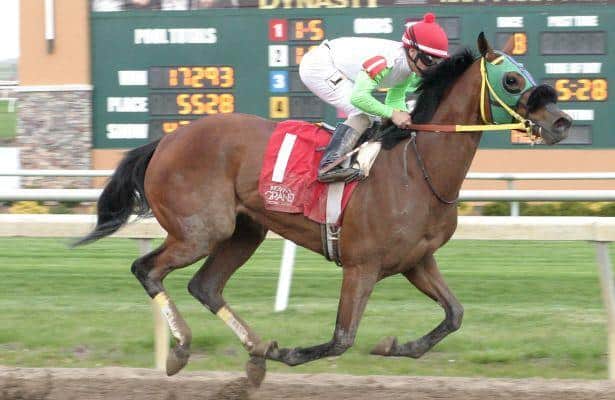 Lady Fog Horn is accomplished on turf and dirt and was entered in both the $100,000 Mari Hulman George on dirt and the $100,000 Indiana General Assembly Distaff on turf.

“I’m going to leave it up to the owner and let him make the call,” Granitz said of Delaware attorney Stuart Grant, who bred and races the Indiana-born and sired Lady Fog Horn in the name of his Elkstone Group. “Because last year I gave it to him and he made some great calls picking what spot we wanted to run. I entered in both because of the weather. It’s nice they give you that option.”

Lady Fog Horn was voted Indiana’s 2015 Horse of the Year for a season in which she went 6-1-1 in nine starts, earning $354,335. She won four Indiana-bred stakes, three on dirt and one on turf and each by a greater margin, capping her year with a second in Churchill Downs’ Grade III Cardinal Handicap on turf.

In her only start this year, the 4-year-old Lady Fog Horn won a first-level allowance race April 20 against open company on dirt at Indiana Grand. She was eligible for the race because her six wins against state-bred company and two in high-priced allowance/optional claiming races (where she was in for the $75,000 claiming price) at Tampa did not count under the eligibility conditions.

“She got a little sick on us, so we missed some training. We had a spot picked out for her at Churchill, and didn’t get to run,” Granitz said of the Mint Julep on turf, whose winner, Cash Control, is running in the Indiana General Assembly. “She had the prep and got sick after that. Now she’s doing well, but both races are very tough.

“She’s a real special filly. I liked her as a 2-year-old, but she was just developing. The (2014) meet ended here in October, and I said to Mr. Grant, ‘Let’s take her to Tampa.’ And he’s like, ‘Well, she’s Indiana-bred. I think the competition will be too tough for her.’ I said, ‘You know, she’s just learning. I’d like to take her there and run her a couple of times and try her on the grass.’

“The first time she ran there, Todd Pletcher had a heavy favorite in the race and won. (Lady Fog Horn) finished fourth, but she ran well. We had her in again. Pletcher had another one there like 3-5. It came off the turf, and we came up the rail in the mud and won the race.”

Grant foals in mares in various states with casino gambling augmenting the breeding and racing programs. He’s the breeder of the Pennsylvania-bred Santa Anita Derby runner-up Mor Spirit, sold as a yearling for $85,000 and again at 2 for $650,000. Granitz notes that Grant earned a record $189,000 in breeding awards last year in addition to purse money.

While Granitz also has a division at Arlington Park and started out in racing 39 years ago in Chicago, he said he’s sold his home there and is building one not far from Shelbyville, Ind.

“Here the stakes are $100,000,” he said. “In Illinois, the biggest stakes for Illinois-breds is $50,000. It’s a tough go in Chicago, fighting the political system up there, the politicians. We can’t get anything done for the tracks.”