Lady Aurelia back to 'aggressive' self in training at Keeneland 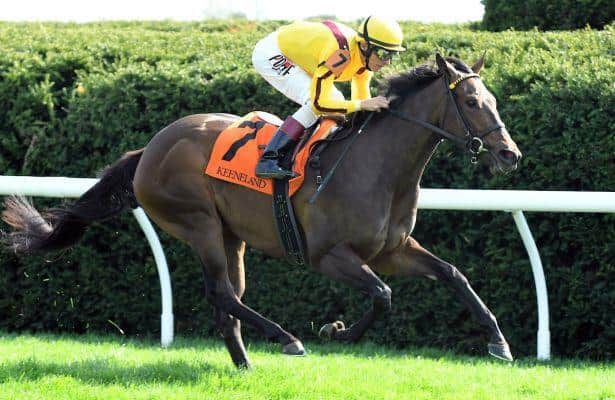 Stonestreet Stables and Peter Leidel’s European champion Lady Aurelia, based at Keeneland with trainer Wesley Ward, worked 4 furlongs on a firm turf course in :48.80 Tuesday in preparation for her third annual appearance in June at Royal Ascot in England, where she won the 2016 Queen Mary (G2) and 2017 King’s Stand (G1).

Lady Aurelia, a 4-year-old Scat Daddy filly, is slated to defend her title in the 5-furlong King’s Stand on June 19, opening day of the meeting.

Today’s work was the second for Lady Aurelia since she opened her 2018 campaign April 14 in Keeneland’s Giant’s Causeway and finished second, 1½ lengths behind Triple Chelsea.

With exercise rider Julio Garcia aboard, Lady Aurelia was on the inside of stakes winner Hemp Hemp Hurray with Bound for Nowhere, winner of Keeneland’s Shakertown (G2) on April 7, breaking off a length behind.

Keeneland clockers caught Hemp Hemp Hurray in :49 and Bound for Nowhere in :49.20.

Ward was pleased with their performances, especially Lady Aurelia’s.

“Last year, working into the Breeders’ Cup (Turf Sprint-G1), I thought she was getting complacent, kinda easy-going, taking things in stride,” he said. “For whatever reason, she went out to Del Mar and didn’t fire and maybe that was a telltale sign that she wasn’t relaxed and doing things on her own.

“Now she’s really aggressive like she has been in the past. That’s what you want to see going to where we’ve been a couple of times before.”

Last year, Lady Aurelia scored a 3-length victory in the King’s Stand after opening her season with a win in the Giant’s Causeway. She then was nosed out of a win in the Aug. 25 Coolmore Nunthorpe (G1) at York by Marsha (IRE). Lady Aurelia was unplaced in the Breeders’ Cup Turf Sprint at Del Mar.

Bound for Nowhere, a 4-year-old son of The Factor owned by Ward, also is being aimed at the King’s Stand. The colt was fourth in last year’s Commonwealth Cup (G1) at Royal Ascot.

“We wanted to give him a cruising work today – nothing real serious until probably next week when we tighten him down a little bit,” Ward said. “He’s doing everything great. (Hall of Fame jockey) Gary Stevens worked him last week and loved the way he went. This week was more of a maintenance breeze. He came through with just what I wanted him to do.”

Bound for Nowhere competed in France last year after Royal Ascot, running unplaced in the LARC Prix Maurice de Gheest (G1) at Deauville in August. He opened his 2018 season with a win in a March 3 allowance at Turfway.