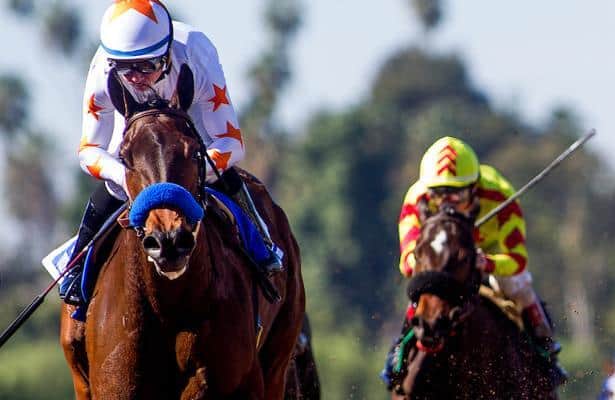 Dream Tree will try to remain undefeated in Wednesday’s Grade 1, $300,000 La Brea Stakes, a highlight on Santa Anita’s opening day along with the Malibu (G1) for 3-year-old colts. The seven-furlong event drew nine entries is one of five stakes races scheduled. It is also the last major race of the year for sophomore fillies.

The La Brea will go off as Race 6 with an approximate post time of 5 p.m. ET. Below is a look at the field with projected morning line odds by HRN:

1. Happy Like a Fool, 5-1 (Distorted Humor – Wesley Ward/John Velasquez – 9:4-1-0 – $326,197): Happy Like a Fool rebounded last out in a six-furlong sprint at Churchill Downs. She was sixth in the Breeders’ Cup Filly & Mare Sprint one start earlier. The multiple Grade 3 winner likes to be right off the pace or on it. She’s proven up to six furlongs and has not been consistently on the board this season. Win contender.

2. Mo See Cal, 20-1 (Uncle Mo – Peter Miller/Mike Smith – 11:4-2-0 – $160,030): Mo See Cal enters on a three-race win streak here, but the La Brea represents her first graded stakes attempt. In two previous stake tries, she was off the board. Two starts back she ran one mile over a track rated “good” when Santa Anita received rare rain. She won that allowance optional claiming race by 10 ¼ lengths on the lead. Mo See Cal then came from just behind the pace last out at Del Mar, again going a mile. Most of her career starts have been of turf, but she seems to have taken to dirt her last two outings. Use underneath.

3. Kelly’s Humor, 30-1 (Midnight Lure – Peter Miller/Joel Rosario – 12:2-3-2 – $254,546): New to the West Coast, Kelly’s Humor has not visited the winner’s circle since her first two starts as a 2-year-old, including the Ellis Park Debutante. She finished third in the Test (G1) at Saratoga, but failed to hit the board in Keeneland’s Raven Run (G2), her last start with trainer Brad Cox. She was off the board again in allowance optional claiming company at Del Mar in her first start for Miller. Fast fractions could help. Pretender.

4. Emboldened, 6-1 (Elusive Quality – Bob Baffert/Joe Talamo – 3:2-0-1 – $88,020): The lightly-raced Godolphin homebred has won on the lead and rallying from the back. She hasn’t raced since May when she won the Angels Flight Stakes at Santa Anita, but has been working regularly since late September. Most of her works have been at five furlongs, which should help her get fit for this spot. Baffert also usually has his horses ready to fire off the layoff. Board hitter.

5. Dream Tree, 4-5 (Uncle Mo – Bob Baffert/Drayden Van Dyke – 5:5-0-0 – $527,500: Dream Tree missed her shot at the Breeders’ Cup Filly & Mare Sprint but remains the one to beat here. She’s won as short as six furlongs and up to 1 1/16 miles, so the distance shouldn’t be a problem. Neither should the layoff from early September, since her Prioress (G2) win came after seven months on the shelf. The only concern is how Dream Tree comes back after throat surgery, though she hasn’t missed a work through December. Look for her to sit close to the pace. The top choice.

6. Heavenhasmynikki, 25-1 (Majestic Warrior – Anthony Quartarolo/Irad Ortiz Jr. – 10:5-0-1 – $204,580): The Ohio-bred, is mostly proven in her home state. She did win an allowance optional claiming race at Gulfstream Park before taking that route to the Kentucky Oaks. Heavenhasmynikki was back in the winner’s circle once sprinting again in Ohio, taking an allowance and two stakes races. She was fourth when stretched back out. The La Brea distance should be to her liking, but this is a big class hike. Pretender.

7. Hot Autumn, 15-1 (Tiz Wonderful – Ian Kruljac/Tyler Baze – 8:2-2-2 – $103,125): The La Brea will be the first stakes try for Hot Autumn. She last won a seven-furlong allowance optional claiming event at Santa Anita and ran away by seven lengths while dueling on the lead. This filly likes to be involved early. She’s only missed the board twice in her entire career so far – her debut in March and a turf race two starts ago. Her last race was impressive, but she’s unproven against this group. Use underneath.

8. Cathedral Reader, 12-1 (Shackleford – Dallas Stewart/Brian Hernandez Jr. – 6:3-1-1 – $154,450): Although she was fifth beaten 8 ¼ lengths in the Prioress, Cathedral Reader improved sprinting on the Kentucky circuit in allowance company. She lost by a head at Churchill Downs, won by a head at Keeneland, then won by three-quarters of a length back at Churchill Downs. She’s not proven in stakes, but has always been thought of well by connections and could be a contender coming from off the pace. Use underneath.

9. Spiced Perfection, 10-1 (Smiling Tiger – Brian Koriner/Flavien Prat – 13:5-4-2 – $442,405): Spiced Perfection enters the La Brea off a 2 ¼-length win in Del Mar’s Betty Grable Stakes. The seven furlongs should also be to her liking. While this is her first graded attempt, the speed should help her as she likes to settle off the pace or mid-pack. She’s only missed the board twice in her career. Live longshot.

Summary: Dream Tree is clearly the one to beat here. Even though she’s lightly raced and is returning from throat surgery, her resume proves best, with a 103 Brisnet Speed Rating from her last start better than any number by a rival in this field. Happy Like a Fool is also proven sprinting, but a tick inconsistent, while Emboldened makes for an interesting comebacker for Baffert should she progress. Hot Autumn, Cathedral Reader and Spiced Perfection are also on the improve and stand to grab a piece of the action