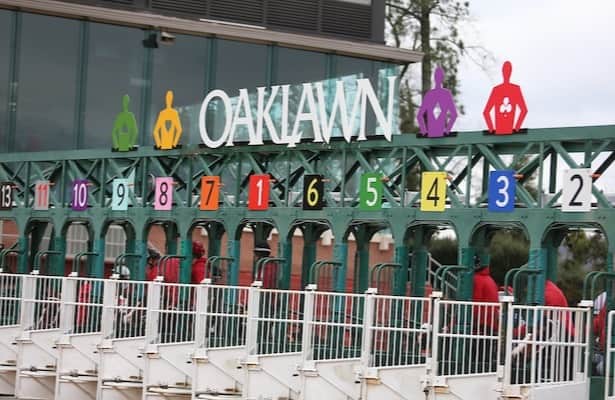 There have been two proven ways to win the Southwest Stakes at Oaklawn. For horses trained by Bob Baffert, it has been go to the front and stay there. For others, it has been closing from off the pace.

History is poised to repeat itself one way or another Saturday. Arabian Knight (1-1), the morning-line favorite, may try to lead again from gate to wire, this time against eight other 3-year-olds who will try to catch him in the Grade 3, $750,000 points prep for Kentucky Derby 2023.

Even Newgrange last year was never farther back than 2 1/2 lengths in third through the first six furlongs. Fourth in the stretch, he was within three-quarters of a length making his winning move.

Conversely, nine of the last 11 Southwest winners who were not trained by Baffert came from at least fourth place or no fewer than three lengths behind at any given call.

These were the Southwest winners’ past-performance lines since 2000, according to Equibase:

Quirin Speed Points, the Brisnet feature that quantifies running styles, show only two of the nine Southwest horses this weekend with an E, or early, designation, meaning a likelihood to be on or near the lead on the backstretch of the 1 1/16-mile race. Arabian Knight has an E 6, and the D. Wayne Lukas-trained maiden winner Western Ghent (20-1) has an E 3. The higher the number between 0 and 8, the more likely a horse is to be forward in the first turn.

Although the Southwest has been a points prep since the current qualifying system started 10 years ago, it has not had a rich history of producing Kentucky Derby winners, not even going back to its roots as in March 1968 as the Southwest Handicap. Only Lil E. Tee in 1992 and Smarty Jones in 2004 graduated from the race to win the roses in Louisville.

A correlation may be made between the Southwest’s penchant for rewarding closers in the winter and the Derby’s trend that rewards being forward early come spring. Six of the last nine winners of America’s biggest race never were farther back than third place at any chart call. Rich Strike was an 80-1 exception last year. The other two, Country House in 2019 and Mandaloun in 2021, did not even cross the finish line first.

Only seven horses from the Southwest have hit the board in the Derby. This was how they all did since 2000:

It is not all about styles. There also is the reluctance of trainers to race their best 3-year-olds before Oaklawn’s older, bigger preps, namely the Rebel (G2) and the Arkansas Derby (G1). According to the Churchill Downs media guide, the Southwest has a collective Kentucky Derby record of 39: 2-2-3, the Rebel 59: 3-2-3 and the Arkansas Derby 118: 7-5-8.

Seven Kentucky Derby winners raced beforehand at Oaklawn, including Sunny’s Halo in 1983, Lil E. Tee in 1992, Grindstone in 1996, Smarty Jones in 2004, Super Saver in 2010, American Pharoah in 2015 and Country House in 2019. Most skipped the early prep races, but they all showed up for the Arkansas Derby.

Arabian Knight might be the exception, at least in the minds of Derby futures bettors in Las Vegas. Even though he would have to be transferred to another trainer by Feb. 28 because of Baffert’s Churchill Downs suspension, he was the 8-1 favorite Wednesday morning at Caesars Sportsbook and the 11-1 second choice behind Breeders’ Cup Juvenile winner Forte at Circa Sports.