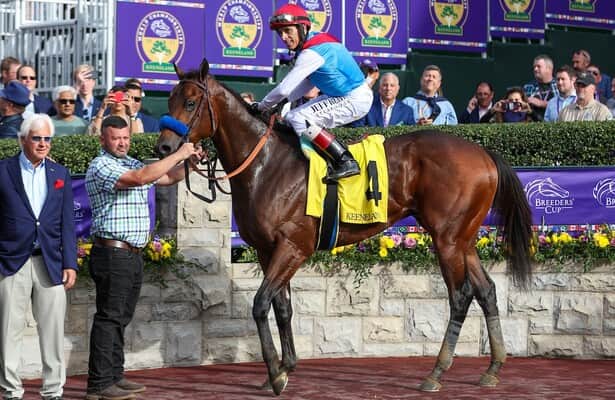 Arabian Knight, the Bob Baffert-trained colt whose November debut made him one of the top Nevada futures choices for Kentucky Derby 2023, will be the likely favorite in a field of nine for the Grade 3, $750,000 Southwest Stakes on Saturday at Oaklawn.

A 7 1/4-length, gate-to-wire winner in the seven-furlong opener on Breeders’ Cup Saturday at Keeneland, Arabian Knight will have John Velázquez riding him again, this time from post 6 in the 1 1/16-mile race that is a points prep for the Derby.

Owned by Amr Zedan, the $2.3 million Uncle Mo colt has a complicated path ahead of him to get to Kentucky. Arabian Knight will not be eligible for the 20-8-6-4-2 qualifying points on offer to as many as five finishers Saturday because Baffert still is ineligible to compete in the Derby. Although he has gone to court to change that, for now his horses would not be able to qualify for the May 6 race unless they were transferred to other trainers by Feb. 28.

With such a move still a possibility, Arabian Knight is the 8-1 favorite in the Derby futures at Caesars Sportsbook and the 11-1 second choice at Circa Sports in Las Vegas.

Baffert and Velázquez won last year’s Southwest with Newgrange. Baffert has won the race a record-equaling five times, including both divisions in the oversubscribed year of 2012. Velázquez has finished first in two runnings of the race.

Arabian Knight, who is out of the once-raced Astrology mare Borealis Night, earned a Beyer Speed Figure of 97 for his win last fall, according to Daily Racing Form.

Corona Bolt ran his record to 2-for-2 after winning by 6 3/4 lengths last month in the Sugar Bowl black-type stakes at Fair Grounds. Flavien Prat will ride from post 2. The Bolt d’Oro colt owned by Barbara Banke’s Stonestreet Stables was best priced at 85-1 in Las Vegas and closed at 32-1 in the just-finished third pool of the pari-mutuel Kentucky Derby Future Wager.

Jace’s Road, who already has 10 Derby qualifying points for his 5 1/2-length victory at Fair Grounds in the Gun Runner, will break from post 3 with Joe Talamo. He was 85-1 in Nevada and 69-1 in the KDFW.

Hit Show already has a win over the track after scoring in a one-mile allowance race Dec. 17. The Gary and Mary West homebred by Candy Ride will be paired with Manny Franco and start from post 8. Hit Show was 135-1 in Las Vegas and 77-1 in the KDFW.

Sun Thunder, one of two Kenny McPeek-trained colts in the race, broke his maiden on his second try when he ran off by 6 1/2 lengths in a New Year’s Eve mile at Oaklawn. David Cabrera will race the Into Mischief colt from the rail post. Sun Thunder’s best Las Vegas price Monday was 175-1. He was 58-1 in the KDFW.

The Southwest is the finale on the 10-race card Saturday at Oaklawn, where the National Weather Service forecast a 20 percent chance of afternoon showers becoming 60 percent likely in the evening. The high will be near 51 degrees.