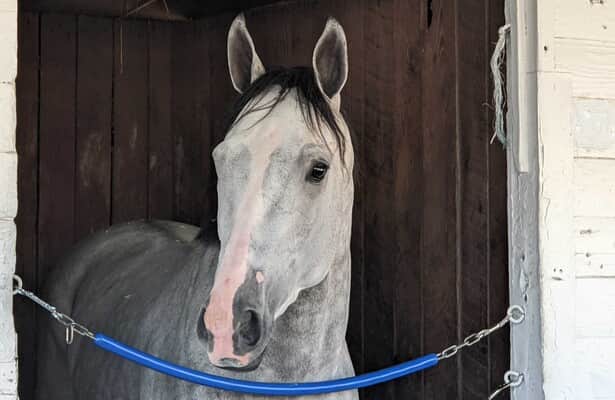 They arrived Monday from Florida, one looking wide awake after a morning flight, the other a little bleary from long van ride through the middle of the night.

White Abarrio settled into his barn stall at Churchill Downs and dropped himself in the hay for a nap after arriving Monday around 4 a.m. EDT, 17 hours after getting on a van at Gulfstream Park. His trainer Saffie Joseph Jr. got in after a relatively short flight to his second Kentucky Derby.

He is hoping that the last horse in will be the first horse across the finish line Saturday.

“He stayed in his home facility where he was most comfortable,” Joseph said. “Ordinarily when we ship horses, we’ve had good success when we’ve shipped as late as possible. With the Derby, we’re trying to keep the same routine that’s been successful for us.”

When he detected humans rustling around his barn to take pictures, White Abarrio responded. The eye-catching gray colt leaned out over the short door of his barn stall and hammed it up.

“He knows you guys are here, and he woke up,” lead owner Clint Cornett said.

White Abarrio has won 4 of 5 starts, including the Holy Bull (G2) and the Florida Derby (G1) nearly two months apart. The only blemish on his record came Nov. 27 at Churchill Downs, where he lost to Smile Happy in the Kentucky Jockey Club (G2). The Race Day colt got caught inside and had to switch out on the way to finishing third.

“After the trip we got at Churchill, we all talked it over,” Joseph said, referring to a conversation with Cornett and his partner Antonio Pagnano. “We said we don’t want to have those ‘excuses’ trips. We want to know if he’s legit or not.”

Jockey Edgard Zayas was replaced by Tyler Gaffalione, who has been aboard for both of White Abarrio’s victories as a 3-year-old. In both cases, he was never more than 2 1/4 lengths behind at any call.

“In the Holy Bull he rode him right up with there with the best (pacesetters),” Joseph said. “If he has to go a little faster earlier or give up some ground, keep him in the clear. It worked then, and we didn’t want to change that in the Florida Derby. We don’t want to have excuses. We utilize his speed to get position from the gate, and it’s worked out.”

Joseph said that will be the plan Saturday. Then again, he admitted that was not exactly a unique idea.

“You want it to be similar,” he said, “but in the Derby, everyone probably has the same thought. You want to get away from there cleanly. You want to break well and be in a forward position if you can.”

Joseph took part in the September 2020 running of the Derby with Ny Traffic, who stalked eventual winner Authentic early before fading to finish eighth. While that experience might have provided added savvy to prepare White Abarrio for this weekend, there is only so much Joseph can apply from 20 months ago.

“Each horse is different,” he said. “He arrived today. You hope he has a good week. It’s another race, but it’s a big one. As far as training-wise, no, you don’t really do much different.”

Returning to where he raced five months ago, White Abarrio will get back on the track for the first time as a 3-year-old Tuesday morning for “a jog or gallop, most likely a jog,” Joseph said. “Wednesday he’ll gallop and maybe school at the gate. Thursday, same thing. And then Friday we’ll gallop again.”

If the forecast of rain for Tuesday comes true, Joseph said, “If it was very sloppy, you’d probably just want to jog in between or gallop lightly. We’ll see how it goes and play it day to day.”

Cornett and his wife Danielle were taking in all the activity a few steps away from the doorway of Joseph’s barn.

He was in the same place last fall and full of hope before White Abarrio’s loss in the Kentucky Jockey Club. Now he looks at it as something on which the team can build.

“I think it’s a good thing,” Cornett said. “He liked the track. He didn’t have the best of trips. He ran well on the track, in general. I think we’re confident he’ll pick it back up and like the track.”