Kukulkan 'can really run' with a graded stakes an option next 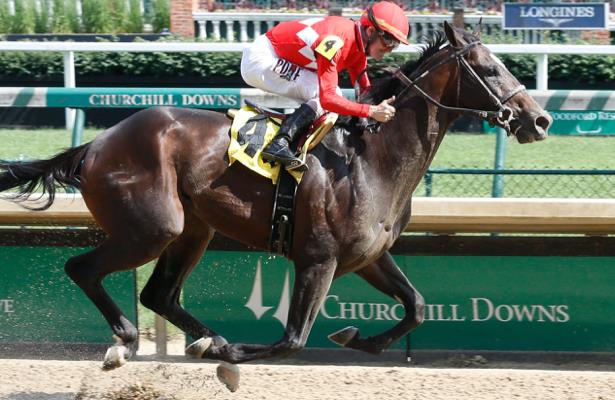 St. George Stable’s 15-time winner Kukulkan could add his name to the list of entrants to the Grade 2, $600,000 Stephen Foster on June 15 following a 1 1/2-length victory in Friday’s featured race at Churchill Downs, a 1 1/16-mile conditioned allowance event.

“This was a very good race for him,” said trainer Fausto Gutierrez, who flew in from his native Mexico to watch Kukulkan. “With the (Stephen Foster) right here, we may look at that race for his next start. I’m just enjoying this one for right now.”

Ridden by Brian Hernandez Jr., Kukulkan closed from about five lengths off the early pace at odds of 11-1 to best a field of nine rivals in a final time of 1:43.84.

In his first race since the Pegasus World Cup, the Mexican Triple Crown winner Kukulkan won a deep Friday feature at @ChurchillDowns. Stakes next? https://t.co/hqwhHv8SVA pic.twitter.com/Rb9eshDHYr

The 4-year-old son of Point Determined is based at Keeneland with trainer Ignacio Correas IV.

“I went to Keeneland to breeze him,” Hernandez said. “I really didn’t know what to expect. You look at his past performances and you see so many wins. He got me excited when we breezed because he can really run.”

Kukulkan’s only blemish in his past performances is an 11th-place finish in the Jan. 26 Pegasus World Cup (G1). The Mexican Triple Crown winner came to the U.S. to compete in Gulfstream Park’s Caribbean Classic Stakes on Dec. 8, when he dominated the competition, winning by 10 ¼ lengths.

Nominations for the Stephen Foster – a “Win and You’re In” race for the Breeders’ Cup Classic (GI) – close June 1. Other horses targeting the race include Alkhaatam, Quip, Seeking the Soul and Yoshida.

Trainer Steve Asmussen reported Friday that Combatant and Tenfold would both be nominated. It hasn't been determined if they'll run.