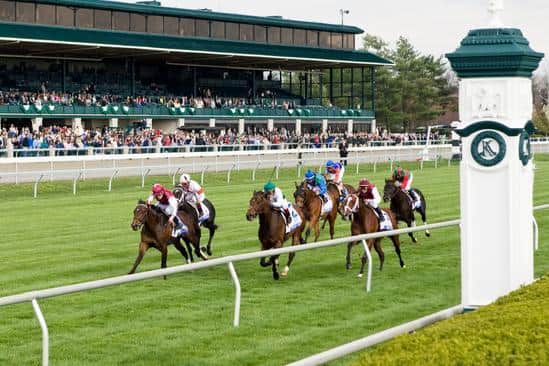 Friday is opening day of the 2014 Spring Meet and will mark the Keeneland debut for trainer Chad Cook when he sends out Kody With a K in the $100,000 Transylvania (G3). Cook, who has five horses here all for owners Michelle and Mark Brown, laughed when asked if he is nervous about the coming activity.

The Transylvania will be the ninth race for Kody With a K, who made the first four starts of his career on turf and most recently raced on dirt at Delta Downs. In February at Delta, after undergoing surgery for an entrapped epiglottis, he broke his maiden by 12¼ lengths going 6½ furlongs and won a

7½-furlong allowance race by 4 lengths. Returning Kody With a K to turf seemed a reasonable next step.

“He’s grass-bred, by Stormy Atlantic,” Cook said. “What the heck? Here we are. We’re going to give him a shot to see if we’re good enough.”

The Browns are retired farmers from Robinson, Ill., who Cook said decided to buy a few racehorses after they sold their operation. Cook, 39, is from nearby Martinsville, Ill., most famously the home of the late Dale Baird, the all-time leading trainer by wins. Baird’s brother Dean and Dean’s son Ron are working with Cook at Keeneland.

Cook, 39, grew up with horses and began working with Thoroughbreds at the county fairgrounds in Martinsville. He became an exercise rider and soon turned to training, sending out his first starter in 2002. Among the horses he trains for the Browns are Roman Unbridled, winner of the Big Drama Stakes at Delta in January. Roman Unbridled was fourth in the Delta Downs Jackpot (G3) last November and most recently was fourth in the Lecomte (G3) at Fair Grounds.

Kody With a K will be ridden in the Transylvania by Chris Rosier, who has been aboard the colt for the past four consecutive races. They will break from post five in the 12-horse race.

“Here’s our ideal situation; we’ve talked about this a lot,” Cook said about how he hopes the Transylvania will unfold. “We’re hoping we just get out there, make a nice easy lead and he can just relax. He’s got the talent, got the speed. He can go the distance.”