Kobe's Back Returns in Hollywood Prevue 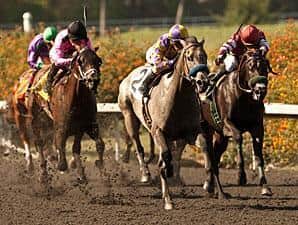 Kobe’s Back, an impressive winner in his debut in the Willard L. Proctor Memorial Stakes during the Spring/Summer meet, returns in the $100,000 Hollywood Prevue Stakes Sunday at Betfair Hollywood Park.

A Grade III for 2-year-olds at seven furlongs over Cushion Track, the Hollywood Prevue is the third of nine races. Post time Sunday at Betfair Hollywood Park is 12:30 p.m. Track gates will open at 9:55 a.m. for simulcasts.

Owned by Lee and Susan Searing’s C R K Stable and trained by John Sadler, Kobe’s Back overcame a horrible start to win the Proctor going away June 15, prevailing by 3 ¼ lengths over Willie B Awesome and seven other juveniles.

Purchased for $480,000 in March at the Ocala Breeders’ Sales Company in Florida, the gray son of Flatter and the Well Decorated mare Well earned $60,000 for his win as the 9-5 favorite.

In his final major drill for the Prevue, Kobe’s Back worked six furlongs from the gate in 1:12 1/5 Oct. 30. It was the best of eight works at the distance that morning at Betfair Hollywood Park.

Shared Belief ships to Southern California after a seven-length win – worth $16,200 - in his Oct. 19 debut at Golden Gate Fields.

Brother Soldier finished fourth of five in the Speakeasy Stakes Oct. 14 a little more than three weeks after he was a first out winner at Barretts Race Meet at Fairplex.

A Brother Derek colt out of the Bertrando mare Desert Drama, Brother Soldier, who is trained by Craig Dollase, has earned $25,800 for J K Racing, LLC.

Golden Dynamo needed five starts to collect his first win, defeating $40,000 claimers by 7 ¼ lengths when stretched to a mile Oct. 11 at Santa Anita.

Owned by Penley Leonard and trained by Robert Leonard, Golden Dynamo has earned $18,000. He’s a gelded son of Borrego and the Expelled mare Senorita Jazzy.