Knowlton, Tagg try to move on after retiring Tiz the Law 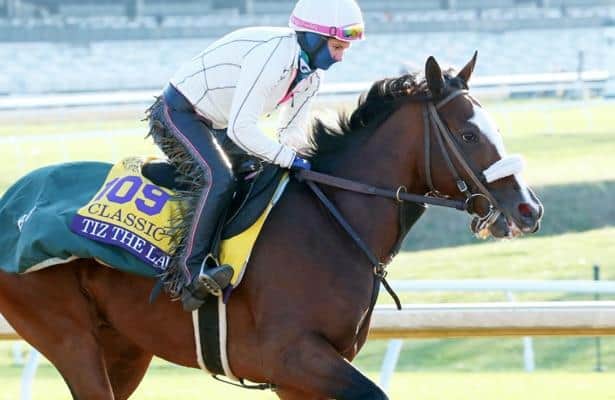 The sting is gone. In thoroughbred racing, there is no time to melt into a sea of self-pity or get lost in a maze of melancholia. Anyone who plays the game rolls the dice with big, tough, fast thoroughbred race horses.

Jack Knowlton and Barclay Tagg got that snake-eyed feeling just before the end of 2020, a year many prefer to forget. Two days before New Year's Day, it was announced that the best horse either had ever been associated with would run no more.

Tiz the Law, winner of three Grade 1 races last year – the Florida Derby, Belmont and Travers – was hastily retired after a bone bruise was found in his right front leg.

Instead of getting the horse ready for the $3 million Pegasus World Cup Invitational (G1) at Gulfstream Park next Saturday, plans were being put together to ship Tiz the Law to his new home at Ashford Stud in Kentucky.

“I hate to say that I’m used to it, but I am kind of used to it,” Tagg, the trainer, said from his winter base at the Palm Meadows Training Center in Florida. “It was a big punch in the gut. One day you are really excited about him and trying to figure out his next race, and then he’s gone.”

Tagg, who has been training horses for 50 years, did not allow himself to fall into a state of depression. He still had 28 horses to train.

“I went to work the next morning,” Tagg said. “You can’t dwell on it. We all know that going in they are very fragile animals, and we ask a lot of them.”

Knowlton, who has been the managing partner for Sackatoga Stable – which owns Tiz the Law – since its inception in 1995, has had quite the run with his strictly New York-bred program. In 2003 he campaigned Funny Cide and he won the Kentucky Derby and Preakness.

Tiz the Law, a New York-bred son of Constitution, finished second in the Kentucky Derby as the overwhelming 7-10 favorite when the COVID pandemic forced the Triple Crown to be run out of order. The Run for the Roses was the second leg and was held on the first Saturday in September.

The Belmont, historically the final leg and run at the grueling distance of 1 1/2 miles, led off the 2020 Triple Crown. The June race was run at 1 1/8 miles.

“There are no ‘what ifs,’” Knowlton said. “Everyone understands that Tiz the Law is a once-in-a-lifetime horse. Never in the world did I think we would get back to that level after Funny Cide. Look, we had two bites of the apple. Some only get one. Most never get that.”

Tagg has been training Knowlton’s horses since 2000. Currently there are eight horses in the Tagg barn that wear the maroon and gray Sackatoga silks.

A year ago at this time Knowlton and Tagg were waiting for Tiz the Law to make his 3-year-old debut in the Holy Bull (G3) at Gulfstream Park. If Tiz the Law were still in the barn, they would be gearing up for the Pegasus.

There is still a Sackatoga goal on Pegasus day. Niko’s Dream,  a 5-year-old mare, is being pointed to the $125,000 Marshua’s River (G3) at a mile on the turf. Knowlton and some of the Sackatoga crew will be at Gulfstream rooting just as hard as they would have for Tiz the Law if he were running in the Pegasus.

Niko’s Dream earned the chance after winning the ungraded My Charmer Stakes against open company last month at odds of 13-1.

“It’s nice to have a horse to run on a big day,” Knowlton said.

Last weekend Tagg and Sackatoga debuted Blitz to Win, a son of Speightster, in a maiden race in open company. Blitz to Win made a huge rally down the Gulfstream stretch and finished third. No one associated with him is going to say this is the second coming of Tiz the Law.

“I never think that far ahead,” Tagg said.

Tiz the Law carried a $110,000 price tag when Sackatoga bought him at the 2018 Fasig-Tipton New York-bred sale at Saratoga.

With Tiz the Law’s success – he earned $2,735,300 in his nine-race career – the Sackatoga pockets got deeper. In September, they paid $309,000 at the New York-bred portion of the Keeneland Fasig-Tipton Selected Yearlings Showcase for a colt by Tiznow who is now a 2-year-old named Tiz Eternal.

Knowlton also forked over $290,000 at the Fasig-Tipton Midlantic 2-year-olds in training sale in June for Tapple Cider, now a 3-year-old filly by Tonalist.

Tiz the Law had 35 Sackatoga partners, including Knowlton. When the Breeders’ Cup was run and Tiz the Law finished a disappointing sixth, there were 75 people who had shares in Sackatoga horses. Since, the number has grown to 85.

When Tiz the Law was in the barn he got the reputation as being a laid-back horse that could take anything that Tagg asked him to do.

“He was not as high strung as Funny Cide,” Tagg said. “Funny Cide worried me. (Tiz the Law) just handled stuff better. Funny Cide was a real powerful, fast horse, and he had that kind of mind, too.”

When Tiz the Law arrived at Ashford in the middle of the night just a few hours into 2021, Tagg was not surprised when he got the report.

“He got there at 3 or 4 in the morning,” Tagg said. “He walked off the van and got a drink of water. He looked around, and everything seemed fine to him. And then he went to his stall. That is him. And we miss him.”

Zipse: Mandaloun is poised for a big 4-year-old season
In most years, winning the Kentucky Derby and the...