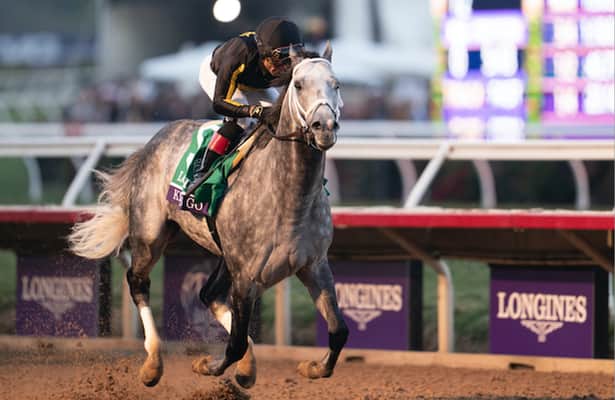 Knicks Go was named the best racehorse in the world in 2021 in Tuesday's World Racing Awards ceremony.

The awards, announced in a virtual ceremony from Newmarket, England, are organized by the Swiss watch brand Longines and the International Federation of Horseracing Authorities.

Knicks Go started 2021 with a win in the Pegasus World Cup (G1) and finished it by winning the Breeders' Cup Classic for trainer Brad Cox. In between, he won three other graded stakes, including the Whitney (G1). He will defend his Pegasus title on Saturday in his last race before being retired to stud.

Congratulations to Knicks Go for being named the 2021 Longines World’s Best Racehorse! With a rating of 129, he was the highest rated racehorse in the world in 2021. °#LonginesWorldRacingAwards pic.twitter.com/PKj4AJaoJ5

Ryan Moore was named the year's best jockey, and the Prix De l'Arc de Triomphe was named the best horse race. Torquator Tasso, at 71-1, won his first race outside Germany, upsetting Hurricane Lane, Adayar and Tarnawa in the process.

The world's best racehorse rankings are established by international handicappers according to the performance of the horses in top races. The highest rated race is determined by averaging the rankings of the first four placed horses.

The IFHA’s annual list of the Top 100 Group/Grade 1 races and the rankings for all horses around the world rated 115 or higher are available on the IFHA website.