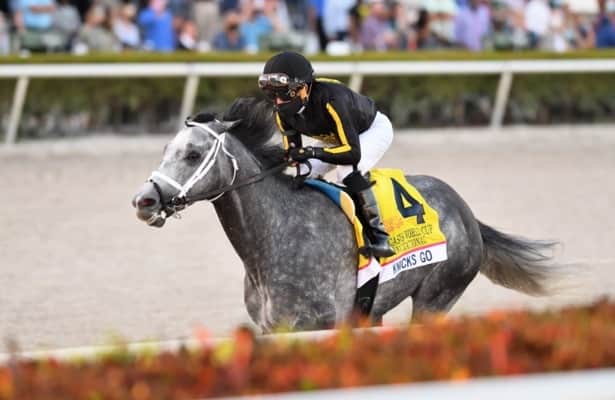 With many of the top runners from 2020's older male division retiring, a void was left to be filled.

Charlatan was the first to answer the call with a dominant performance in the Malibu Stakes (G1) on Dec. 26, and Knicks Go quickly followed as he proved he is just as effective beyond one mile with an easy win in Saturday's Pegasus World Cup (G1).

Jesus' Team continued his swift ascent up the division leaderboard with another strong second to Knicks Go. One of the best claims in recent memories, Jesus' Team shows up with an honest effort each time he runs and could have a Grade 1 with his name on it sometime this year.

It is possible that all three runners could square off in the $20 million Saudi Cup, a race that is likely to produce a clear leader of the division for the rest of 2021.

Maxfield eventually might have something to say about that, but he will not be headed to the Saudi Cup, trainer Brendan Walsh said Monday. The lightly raced colt still has the upside to threaten the top trio. He will have his next chance to make a statement on Feb. 13 in either the Razorback Stakes (G3) or Mineshaft Handicap (G3).

Happy Saver, who like Maxfield is undefeated in four starts, is another colt with star potential, but he has not worked since his victory in the Jockey Club Gold Cup (G1) on Oct. 10.

Two veterans of the division, Code of Honor and Tacitus, are trying to prove they can still hang with the elite. Code of Honor disappointed when running a lackluster fifth in the Pegasus World Cup. Tacitus will be given an opportunity to face the cream of the crop in the Saudi Cup.

Like Code of Honor, Tax squandered a golden opportunity in the Pegasus. Coming off a sharp win in the Harlan's Holiday (G3), he could manage only a 10th-place finish and has fallen to No. 38 in this week's HRN rankings.

With his fourth victory in a row under Brad Cox, Knicks Go has moved to the No. 3 spot in the rankings, narrowly behind Swiss Skydiver and Monomoy Girl for the top spot.

Jesus' Team has leapt all the way to No. 6, right on the heels of Charlatan and Gamine. Happy Saver, Tacitus, Whitmore and Maxfield round out the top 10 this week.

Colonel Liam moved up from outside the top 100 to No. 82 this week after his win in the Pegasus World Cup Turf (G1), but he has yet to gain the attention of voters. Look for him to rise quickly in the coming weeks.

The contender rankings are generated by user and staff ratings for top active horses. If the list is missing a horse you are watching, you may add that horse, rate it and watch it climb the ladder. Click here for more on HRN’s Power Rankings and voting.

Below is a screen shot of the top 20 contenders. Click here to see the complete rankings list of top active horses for 2021. 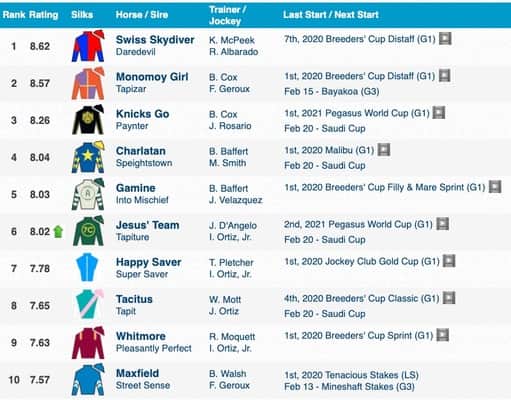 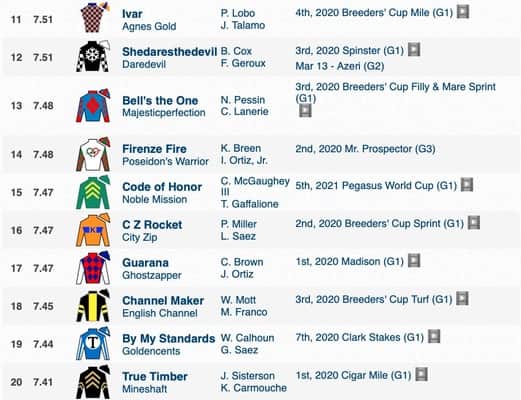