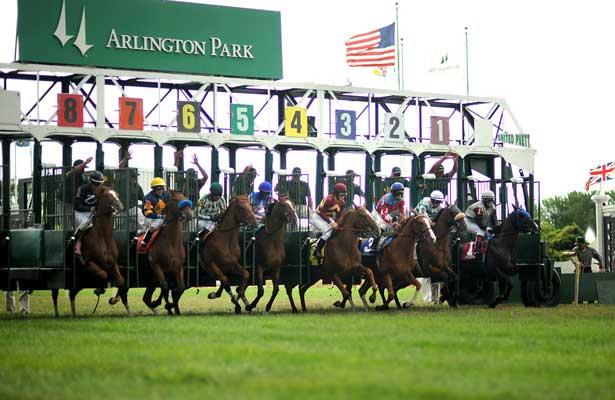 Defending champion Kip Berries heads a field of 10 Illinois-bred distaffers for the 2014 edition of the $100,000 Isaac Murphy Handicap on Saturday at Arlington International Racecourse.  The six-furlong dash will be the ninth race on the 11-race card that starts at 1 p.m. Central time.

A daughter of Kipling, Kip Berries races for the Tom Swearingen Racing Stable, Leonard Denk, Daren Carlile and Robert Bockel and is making just her second start since winning last year's edition of the Isaac Murphy.  In her only run in 2014, the 8-year-old mare caught a stakes-quality allowance field on May 16 and finished last of six.  Trained by Tom Swearingen, Kip Berries has shown an affinity for Arlington's Polytrack with four victories over the surface.  Florent Geroux picks up the mount aboard the 121-pound starting highweight.

Among those standing in the way of a Kip Berries repeat are last year's second- and third-place finishers - the Louie Roussel III-owned and -trained Smiling Gambler and Larry Owens' Royal Posh, respectively.

A daughter of Wild Gambler, Smiling Gambler is winless in her five starts since last year's running.  Most recently, the 6-year-old mare made her 2014 debut and fourth in an open company allowance race on May 23.  Emmanuel Esquivel picks up the mount aboard Smiling Gambler, who has been assigned 113 pounds.

Royal Posh will be making just the second start of her 2014 campaign, finishing second in her seasonal bow after having a brief lead in a five-furlong turf sprint on May 26.  The 6-year-old Posh mare has three wins over Arlington's Polytack - all of which came in 2011.  Sheldon Russell has been named to ride the Steve Manley trainee who will carry 115 pounds Saturday.

Algonquin Posse is one of two distaffers representing owner William Stiritz in the Isaac Murphy with the other being Scarlet Power.  The former, a 6-year-old daughter of Posse assigned 120 pounds for Saturday's headliner, will be making her 2014 debut in the Isaac Murphy, a race in which she finished seventh last year.  In two starts since that race, she was placed second in the $50,000 Lady Riss at Fairmount Park and ran third in an open company allowance race at Hawthorne.  The latter, a 4-year-old Powerscourt filly, is one for three this year and most recently ran third in the aforementioned May 16 allowance race.  She has been assigned 118 pounds.  Trainer Scott Becker has given the mount aboard Algonquin Posse to Chris Emigh while Israel Ocampo will ride Scarlet Power.

Trainer Wayne Catalano sends out Arapaho Royal LLC's Stormin Elle.  A 4-year-old daughter of Stormello, Stormin Elle turns back in distance after running third when going a mile against open allowance company last month in her 2014 debut.  She broke her maiden last July and ran second against state-bred allowance competition over the Polytrack during her sophomore season.  E. T. Baird will once again partner with Stormin Ellie on Saturday, who is listed to carry 118 pounds.