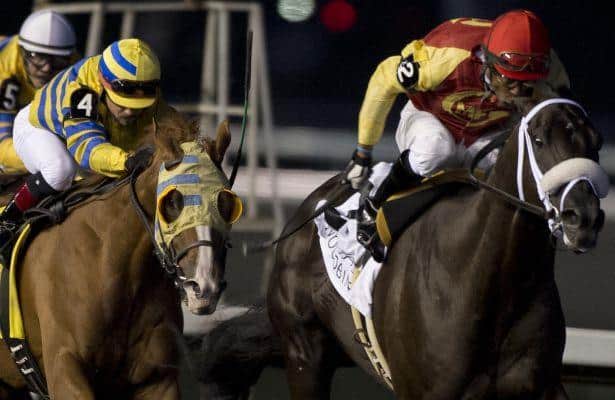 Kingsport, expertly piloted by Patrick Husbands, swept to the lead at the top of the lane and never looked back capturing Wednesday night's $125,000 Deputy Minister Stakes in stylish fashion, at Woodbine.

Trained by Sid Attard for owner Goldmart Farms and Royal Laser Racing Inc., Kingsport arrived at the seven furlong 'Poly' sprint for Ontario-sired sophomores from a driving 1/2-length score over older company in an optional claiming route on the E.P. Taylor Turf Course.

Seffeara, the recent Bold Ruckus Stakes winner, and Three Ring Circus contested the early pace of the Deputy Minister marking off splits of :22.15 and :44.85 with Goodoldhockeygame and Kingsport stalking their early foot.

Goodoldhockeygame challenged the leaders through the turn to take a short lead, but could not repel the onrushing Kingsport who widened under light handling en route to a 2 3/4-length score. Goodoldhockeygame stayed on for place, 2 3/4-lengths in front of Super Colerosa.  R U Watchingbud,  who was slow to stride and trailed, rallied for fourth.  Kingsport covered seven furlongs in 1:21.82.

Attard was pleased with the effort of last year's Kingarvie Stakes champ, who earlier this year was considered among the contenders for the Queen's Plate, before taking a different path.

"This horse was so heavy it took forever for him to come around, but now he has come around nicely. I loved him today, not just because he won, but because he came into this race very well," said Attard.

The stalking trip provided by Husbands was much appreciated by the veteran conditioner.

"He's one of the best, I've had a lot of luck with Patrick," said Attard.

Kingsport, a dark bay son of Milwaukee Brew-Green Jewel, banked $75,000 in victory while improving his record to 4-1-2 from eight starts.