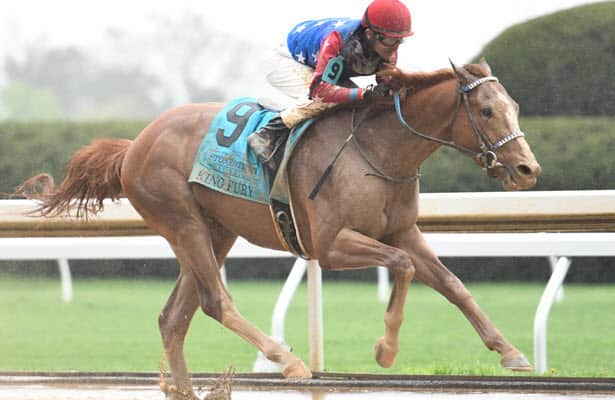 King Fury returned from a 4 1/2 -month layoff on Saturday to win the $200,000 Lexington Stakes (G3) at Keeneland for trainer Kenny McPeek, earning 20 Kentucky Derby points on the way to an 18-1 upset.

The race was the Curlin colt’s first win since the Street Sense last October at Churchill Downs. In his two subsequent efforts, King Fury finished seventh in the Breeders’ Cup Juvenile at Keeneland and fifth most recently in the Nov. 28 Kentucky Jockey Club (G2) at Churchill Downs.

The lackluster efforts to close out the year prompted Three Chimneys Farm, which co-owns the King Fury with Fern Circle Stables, to send the colt to the farm for an extended break.

“We had a couple of vets go over him, he didn’t really have anything wrong with him,” McPeek said after the race. “We gave him some rest and we brought him back and he’s bigger and stronger. Trained great all winter and he really kind of drug us to this race.”

King Fury, ridden by Brian Hernandez Jr. sat towards the back of the field, but came running around the far turn to take the lead at the head of the stretch, where he widened the gap and earned the win by 2 3/4 lengths with a final time of 1:43.50.

“He’s steady,” McPeek said. “He understands running through dirt. He’s a real level-leaded colt, nothing phases him. I wasn’t worried about it at all.”

King Fury was a $950,000 purchase at the August 2019 Fasig-Tipton Saratoga Select yearling sale, and McPeek said he is the highest priced horse the trainer has ever got at auction. King Fury is out of Taris, a Grade 1 winner, and is her first offspring to make the races.

“I’ve got this history of 30 grand and 50,” McPeek said of his auction purchases. “Maybe I’ll get a million next time.”

The win puts the King Fury on the outside of the Kentucky Derby bubble with 20 points. McPeek said the race will be under consideration as a next stop for King Fury if he can get in. Otherwise the Preakness two weeks later will await.

“I think he could handle the mile and a quarter without any trouble,” McPeek said. “Whether he gets in or not is out of my control but he’ll either run in the Derby or Preakness.”