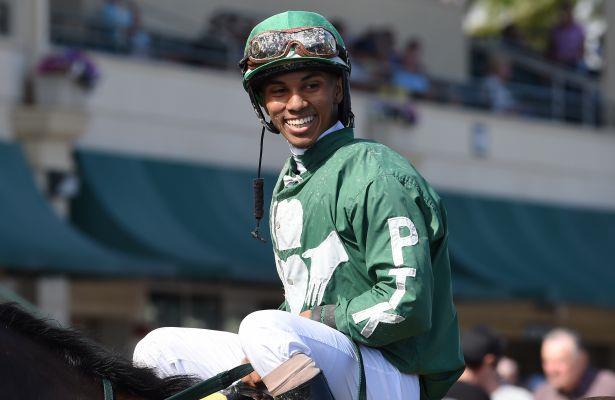 Jockey Reylu Gutierrez has maintained an even keel despite the natural fluctuations in a young rider's career. That tenacity has paid off in a big way.

Gutierrez was a finalist for the Eclipse Award for outstanding apprentice in 2018, earned his first graded stakes win in 2019 and has become a regular on the NYRA circuit, garnering a place in one of the world's most competitive jockey colonies.

Now, another milestone has come for Gutierrez: his first mount in an American Classic, as Hall of Fame trainer Steve Asmussen tabbed the 23-year-old to ride Jungle Runner in the 152nd Belmont Stakes on June 20.

"I'm kind of speechless. I was working the horse for the Belmont Stakes, but I was assuming I was working him just to get him ready," said Gutierrez, whose surprise was palpable when informed of the news. "It's an incredible opportunity. I've had a good start to the spring meet and I wasn't expecting it. I'm super excited."

A native of Rochester, N.Y., Gutierrez took a nontraditional path to his career, first attending Cortland State University, where he graduated with a degree in exercise physiology. The son of trainer Luis Gutierrez and the nephew of jockey Jose Gutierrez, Reylu started riding in 2017, winning just once in 61 starts.

But in 2018, Gutierrez made 843 starts and won 109 races, earning more than $3.3 million. His wins and earnings ranked second among all apprentices in 2018. In 2019, he won his first graded stakes aboard Do Share in the Grade 3 Tom Fool Handicap.

"I've really had to put in the time and get better," Gutierrez said. "Last year, I rode a lot in Florida. I got more experience, but my long-term goal was to ride here in New York. I came back this winter a much better rider. I work with my agent, Rudy Rodriguez Jr., and it's been great for my career.

"With the pandemic, we wanted to stay here and build our business and help the horsemen here. It's a great opportunity now, and we'll embrace it with open arms and do our best."

Gutierrez said he has some experience in a big race in the Empire State, finishing second aboard Not That Brady to Bankit in the New York Derby last July at his local track at Finger Lakes. The million-dollar Belmont Stakes -- the oldest of the Triple Crown races -- is one of the sport's biggest stakes and for the first time in history will be run as the first leg of the Triple Crown to properly account for the schedule adjustments and overall calendar for 3-year-olds in training.

"I've been preparing for this my whole life," Gutierrez said. "Last year, I rode in the New York Derby up in Finger Lakes, and that's the biggest race at Finger Lakes. I lost that race; it was a heartbreaker since a lot of people from home were cheering me on and came up to see me. But the Belmont is the biggest race in New York, so I'm very excited. I haven't had a lot of these moments, but I'll be prepared."

Jungle Runner has two wins in eight career starts. With the Belmont Stakes moved to 1 1/8 miles as the first leg of the Triple Crown this year, the Candy Ride colt will be competing at that distance for a second consecutive start after running eighth in the Grade 1 Arkansas Derby on May 20 at Oaklawn Park.

Jungle Runner won his stakes debut in the Clever Trevor on Nov. 1 at Remington Park and has finished out of the money in four subsequent starts. As one of the expected long shots, Gutierrez said he will approach the Belmont the same as he did a maiden claimer at Finger Lakes or Aqueduct.

"I approach it like any other race," Gutierrez said. "I have a job to do out there. You have to prepare, get there early and get my jog in before the races. I'm just really happy to be out there. I'll take a moment before the race and have it sink in. But once we're on to the post parade, it's time to focus."