Kimbear emerges a winner in Al Maktoum Challenge Round 1 thriller 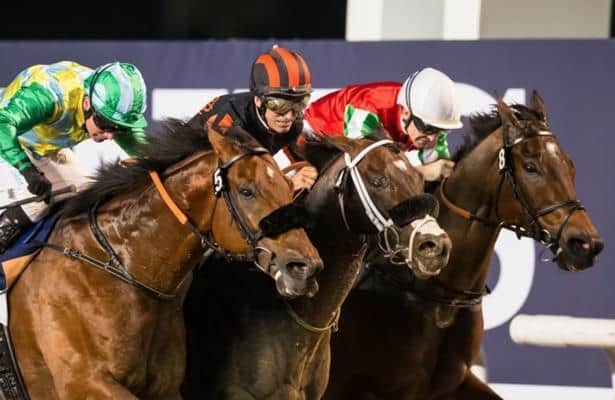 Thursday's Al Maktoum Challenge Round 1 proved to be an absolute thriller in which three horses — North America on the inside, Kimbear between an inside and Secret Ambition outside — hit the finish line together.

The photo finish revealed it was Kimbear, with Pat Dobbs aboard for trainer Doug Watson and owner Sheikh Rashid bin Humaid Al Nuaimi, on top by the slightest of margins in the Dubai World Cup Carnival feature.

The 6-year-old son of Temple City has always been held in high regard by his connections and was turning the tables on Secret Ambition and jockey Tadhg O’Shea, who defeated him three weeks ago in the Dubai Creek Mile. Favorite North America was third under Richard Mullen with another nine lengths back to Watson-trained Muntazah.

It was a third course and distance victory for Kimbear, but first since beating Secret Ambition in the 2018 Group 3 Burj Nahaar.

“He was very brave today,” Dobbs said. “He was following (North America) and hit a flat point turning in. Then he got a second wind and stuck his head down at the line. Luckily our head was down at the line. His work has been exceptional at home. I didn’t think he’d get beat last time. Doug is a brilliant trainer. He knows how to get them to progress through the year. You’ve got to tip your hat to him.”

“He ran a great race,” Watson added. “He likes a fight. Last year was such a struggle and this year he has just done everything right. Those are two nice horses that he just finished with and we were lucky to get away with that. Pat gave him a great ride. He was fit today and his works were fantastic. He always needs that first run. I was little worried with it being three weeks back (after the Listed Dubai Creek Mile).

"We’ll give him a nice break now. It’s a great win for Sheikh Rashid. He bought this horse a couple years ago and last year wasn’t his year. Hopefully it is this year. I was really pleased with Muntazah. It’s tough to come back being a big heavy horse. He dug in there and finished fourth.”

O’Shea and Mullen — both riding Satish Seemar trainees — were defeated, but not downtrodden.

Mullen added: “He ran a super race, but unfortunately he did the same thing he did in the (Dubai) World Cup, where he ripped a patch of his foot and it’s bleeding pretty badly. I thought he got tired, but it was his foot and it was sore. That’s the down side to him; he has bad feet. Hopefully we can patch him up and come back with him.”

“They went very fast early and it was a blitzing pace and I guess this is how it goes,” Seemar said immediately following the race. “In a result like this, there’s no excuses. North America usually is good first run, but the speed was really fast early. Secret Ambition is a good horse and ran really well.”