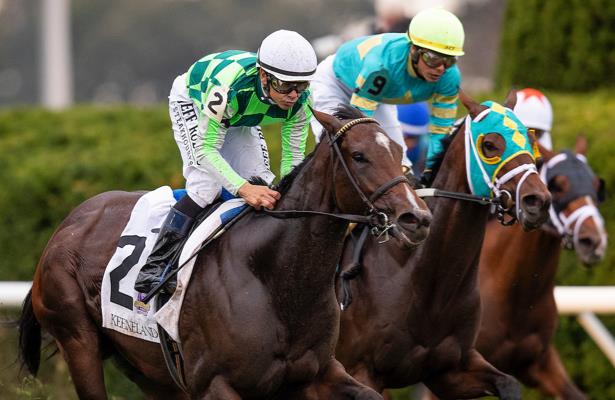 “We’re going to try to get as many in there as we can and may the best horse win,” Ward said Sunday at Keeneland. “And hopefully one of them is mine.”

Kimari turned in a stirring last-to-first run Sunday to take the Indian Summer. Under Mike Smith, the Munnings filly tore down the stretch five-wide and edged Chimney Rock by a half-length.

It was Chimney Rock’s second straight narrow loss to a Ward-trained filly. The Mike Maker-trained 2-year-old came up a head short of Cambria last month at Kentucky Downs.

“This was a perfect race here to set up for the Breeders’ Cup, being here at her home track, Keeneland,” Ward said. “She showed a new dimension that she was able to sit back in case there was a big speed duel up front.

“She looked like she rated it beautifully. Mike said that when he eased her out, she just took off. She knew where the wire was.”

Kimari will go to the Breeders’ Cup as no stranger to high-profile environments. She’s won three of her four career starts, with those victories coming in the prestigious Keeneland and Saratoga meets.

The filly’s only loss was a second-place run on England’s biggest stage, Royal Ascot, in the Queen Mary Stakes (G2).

“Beyond the Breeders’ Cup, I think she’s going to have a big future, on the dirt or turf,” Ward said. “She can do either. It’s nice to have a filly like this. …

“Everyone in this game, from the top to the bottom, you strive to get a good one. Thank God we have one right now. The future is so bright for this filly and she’s so sound right now. She has no issues at all. We’re heading into the Big Dance here ready to go.”

Irad Ortiz Jr. kept Four Wheel Drive, a son of American Pharoah, forwardly placed behind pace-setting Jack and Noah. He then kicked clear in the stretch and scored by three lengths over Freewheeler.

Four Wheel Drive is an early 2-for-2 as a 2-year-old, with both wins coming in stakes company. Prior to Sunday’s win, he debuted with a victory Aug. 31 in the Rosie’s Stakes at Colonial Downs.

“We’ll talk it over with the owners, seeing which direction we want to go,” Ward said. “If it’s a mile, being by American Pharoah, it won’t be an issue. Or we can send him into the Sprint.”