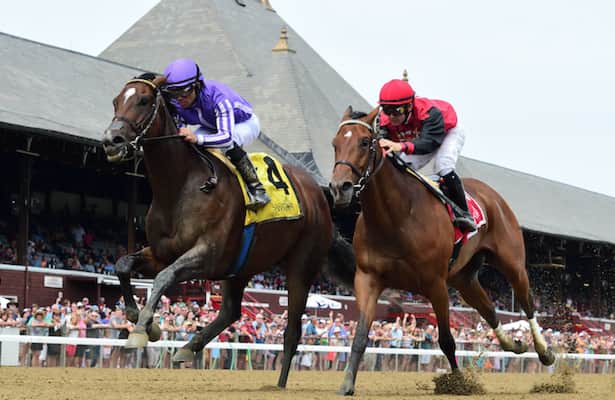 Multiple graded stakes-winner Kimari will seek to double up on graded stakes scores this season when shipping back to New York for Sunday’s Grade 2, $250,000 Gallant Bloom for fillies and mares 3-years-old and upward going 6 1/2 furlongs at the Belmont at the Big A fall meet.

Owned by Westerberg, Mrs. John Magnier, Jonathan Poulin, Derrick Smith and Michael B. Tabor, Kimari was last seen capturing the Honorable Miss Handicap (G2) on July 27 at Saratoga Race Course, where she made a five wide move in upper stretch and collared 2020 Gallant Bloom winner Frank’s Rockette to win by a half-length and garner a career-best 105 Beyer Speed Figure.

Kimari, a 5-year-old Munnings chestnut trained by Wesley Ward, has displayed versatility in her 15 starts, including stakes triumphs over dirt and turf. During her juvenile season in 2019, she won Saratoga’s Bolton Landing over the Mellon turf following an overseas engagement when a close second in the Group 2 Queen Mary at Royal Ascot. She also won the Indian Summer that October on turf at Keeneland. Kimari earned her first Grade 1 victory in last year’s seven-furlong Madison over the Keeneland main track following a triumph in the Spring Fever at Oaklawn Park.

Initially targeting the Thoroughbred Club of America (G2) on Oct. 8 at Keeneland, where Kimari is based, Ward decided to regroup and ship her back to the Empire State for the Gallant Bloom due to the better spacing for her year-end target – the Grade 1, $1 million Breeders’ Cup Filly and Mare Sprint on Nov. 5.

Ward spoke of his confidence heading into the Honorable Miss and added that jockey Joel Rosario appears to be the perfect pilot for his eight-time winning mare.

“The filly was training great and that’s the thing with her, because she’s so big. She was training so well, I was confident going into the race, especially with Rosario,” Ward said. “That’s who she seems to run the best for, and he rides her the best of anyone. He gives her a little break the first part of the race and eases her out with that big stride and lets the race come to him. I just thought she was going to run really big and it would take a good one to beat her and luckily, she got to the outside, did exactly what he wanted and won it. She came out of the race really, really well so I’m looking forward to it.”

Rosario, a four-time winner aboard Kimari, will retain the mount from post 5.

The Tom Albertrani-trained gray daughter of Cupid will face elders for the first time as she attempts to return to the winner’s circle for the first time since defeating her New York-bred counterparts in the Bouwerie on May 30 at Belmont Park. Sterling Silver was entered in a couple of ambitious spots this spring when going two turns in the Busher Invitational in March at the Big A and the Ashland (G1) the following month at Keeneland, finishing a distant fifth both times.

Albertrani said Sterling Silver appears to have found her niche going one turn. Prior to the Prioress, she was third in the Victory Ride (G3) at Belmont Park before a distant fourth in the Test (G1) at Saratoga.

“She’s been training really well since the Prioress so we’re hoping to see her come back and run the same sort of race this weekend,” Albertrani said. “We’ve tried her in a couple tough spots and stretching her out, but we felt that her best distance now is going between six, seven, and eight (furlongs) and she’s been very effective since we’ve shortened her back up again.”

Bred by Mallory Mort and Karen Mort, Sterling Silver was bought for a frugal $13,000 out of the 2020 Fasig-Tipton Select Sale, where she was consigned by Denali Stud.

Trevor McCarthy, the pilot in all but one of Sterling Silver’s eight starts, will pilot the filly once more from post 3.

Trainer Robert Falcone, Jr. will saddle Sandford Goldfarb’s Remain Anonymous, who was claimed by her trainer two starts back for $32,000 following a 6 1/2-length score at Saratoga. The bay daughter of Tapiture made her first start for Falcone a winning one when facing fellow Pennsylvania-breds, including reigning Pennsylvania-bred Horse of the Year Chub Wagon, in the six-furlong Dr. Teresa Garofalo Memorial on Aug. 22 at Parx Racing.

Remain Anonymous will stretch out a half-furlong for the Gallant Bloom.

“The way she made her run at Parx, that would actually be better for her,” Falcone, Jr. said. “I like that more than I don’t like it. Hopefully there’s some speed and they can knock heads as she’ll get the extra half-furlong to help her run them down.”

Frank Fletcher Racing Operations’ Lady Rocket will return to the Big A for the first time since garnering a 107 Beyer for her victory in the Go for Wand (G3) in December for trainer Brad Cox. Second in last year’s Gallant Bloom, the dual graded stakes-winning daughter of Tale of the Cat won the Chicago (G3) on June 25 at Churchill Downs two starts back before an uncharacteristic sixth, beaten 13 lengths, in the Ballerina Handicap (G1) on Aug. 28 at Saratoga.

Finishing in the money in a dozen-of-15 starts, Lady Rocket has banked $707,088 in lifetime earnings.

Completing the field is Stud Los Leones’ Chilean-bred Cheetara – an Ignacio Correas IV-trained Daddy Long Legs mare who eyes her first stateside graded stakes victory. In her native country, she won the Group 2 Haras de Chile in December 2020 and earned her first triumph in the Northern Hemisphere that following August in Colonial Downs’ Seeking the Pearl. Three starts back, she won going the Gallant Bloom distance in the Crestwood on June 4 at Hawthorne.

Vincent Cheminaud will make the trip to pilot Cheetara from post 4.

The Gallant Bloom honors the 1977 Hall of Fame inductee who, from ages 2-to-4, won 12 consecutive races on both coasts, including the Monmouth Oaks, Delaware Oaks, Gazelle Handicap, Spinster, Santa Margarita, and the Gardenia – where she defeated fellow Hall of Famer Shuvee. She was trained by Hall of Famer Max Hirsch, and later Buddy Hirsch, and owned by King Ranch proprietor Robert Kleburg, Jr. The Gallant Bloom is carded as Race 9 on Sunday’s 10-race program. First post is 1 p.m. EDT.