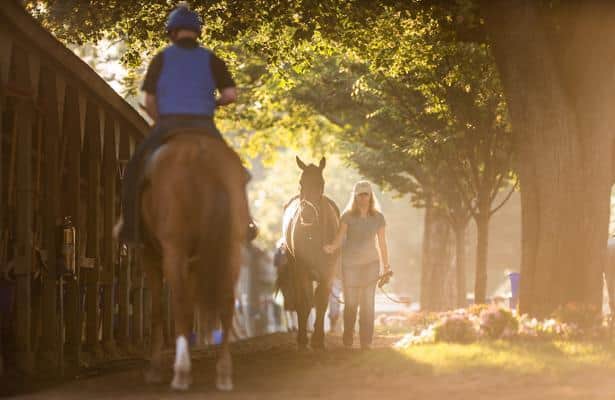 The Jockey Club, North America's Thoroughbred breed registry, was not among the racetracks and organizations present Tuesday when the new Thoroughbred Safety Coalition launched, with aims at making immediate changes at venues hosting 85% of graded stakes races in the United States.

But The Jockey Club added a valuable endorsement of the group in a statement Wednesday, within it encouraging all other racetracks to join the likes of the Breeders' Cup, Churchill Downs, Del Mar, Keeneland, NYRA, and The Stronach Group.

“The Jockey Club supports the aims of this coalition and believes that its efforts will improve equine health,” said Jim Gagliano, president and chief operating officer of The Jockey Club. "The entire racing industry needs to get on board for these proposals to have maximum impact.”

RELATED: Here's what the new Coalition's out to accomplish

The Jockey Club is a strong proponent of the Horseracing Integrity Act, legislation that would establish a national, government-run anti-doping organization to oversee medication use and rules in racing. Members of the Thoroughbred Safety Coalition said they intend to establish new house rules and, when necessary, work through their various racing commissions.

“Some of us in the Coalition are obviously for the Horseracing Integrity Act. Some of us are openly against it,” said Drew Fleming, the recently named Breeders’ Cup president and CEO. “But again, everything’s on the table, including some form of federal legislation.“But one important point I want to emphasize is the need for immediacy. We all know federal legislation can take some time, and that’s why we’re here today — to make immediate, impactful change.”

The Thoroughbred Safety Coalition did not touch on one testy subject in racing: the anti-bleeding drug Lasix. Likely because of that, the National Horsemen’s Benevolent and Protective Association -- which is in favor of continued Lasix use -- also voiced support for the new Coalition.

"On Tuesday, Nov. 19, the horse racing industry saw several of the nation’s leading Thoroughbred racetracks and the Breeders’ Cup announce the creation of an effort to unify the industry in enhancing existing protections and working together to develop new reforms to ensure the safety of the sport’s equine and human athletes.

"We applaud the group, announced as the Thoroughbred Safety Coalition, who seeks to create and implement a series of significant safety, medication, operational and integrity guidelines across Thoroughbred racing to ensure the well-being of horses and jockeys and to increase transparency and accountability.

"As CEO of the National Horsemen’s Benevolent and Protective Association, I — along with all my members — have always been focused the health and safety of the horse, the safety of the jockey and the safety of all individuals coming into contact with the horse. I firmly believe in being open, honest, transparent and insisting on the highest standards of horsemanship, and the HBPA continually seeks ways to improve the care, health and safety of Thoroughbred racehorses. We owe it to our industry’s athletes to ensure each horse is given the protection and attention they deserve — because two lives depend on us doing so.

"Certainly it was made clear from their announcement that the founding members are open to other important organizations providing input and direction toward the coalition efforts. We look forward to working with the coalition members to ensure the safety and integrity of our industry."