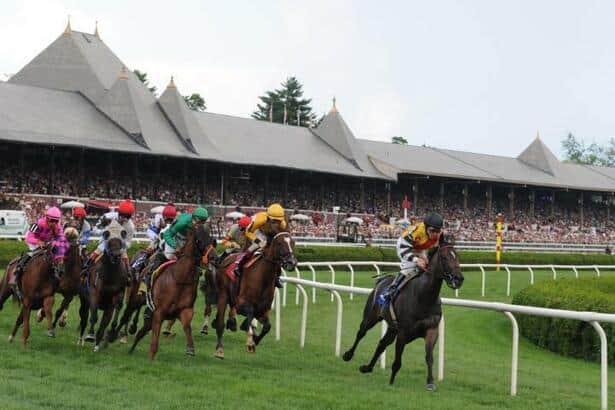 The road to stakes competition was a circuitous one for Key Biscayne, who completed the journey in her ninth start when she ran fourth in the nine-furlong Grade 2 Lake Placid on July 19 at Saratoga.

On Sunday, the Juan Alvarado trainee will get another opportunity to face high-caliber turf routers, as the superfecta of the Lake Placid all return in the $500,000 Saratoga Oaks Invitational.

In the Lake Placid, Key Biscayne was stretched out to 1 1/8 miles for the first time. Alvarado said running at the Saratoga Oaks' distance of 1 3/16 miles on the Mellon turf course could suit her strengths.

"She has kept training good and a little more distance should be good; we're ready to go in this race," Alvarado said. "The distance will be better for her."

Key Biscayne, owned by Arindel, broke her maiden in her sixth start on May 1 at Gulfstream Park. The Brethren filly broke through after three previous on-the-board finishes, with back-to-back runner-up efforts in maiden special weights in June and July 2019 at Gulfstream Park to cap her juvenile campaign. In her sophomore debut, she ran third, a half-length back to Urban Fairytale, off an eight-month layoff on March 29 at Gulfstream.

"She's improved a lot," Alvarado said. "She's a more mature horse. She also likes the track over here. I think the field she is facing, it's [challenging], but I think she'll be there."

Key Biscayne is the longest shot on the morning line at 15-1 from post 5. She will pick up the services of jockey Irad Ortiz, Jr. for the first time.