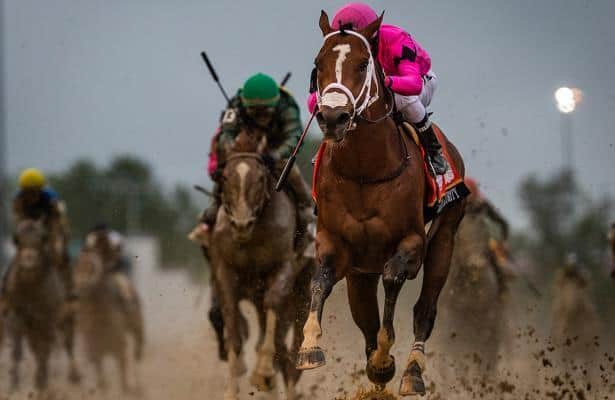 Will we see them in court?

The KHRC’s grounds are simple: It considers all stewards’ decisions — such as the one that dropped West’s Maximum Security from first to 17th in the running order at Churchill Downs — to be final.

John Forgy, counsel for the KHRC, wrote that West isn’t entitled to a hearing because owners licensed in Kentucky agree “to abide by the Commission's rules and regulations,” including that stewards’ decisions can’t be challenged.

This saga still might not be over, as West indicated in the minutes following Saturday’s decision he’d seek legal action if necessary.

Earlier Monday, West’s racing manager, Ben Glass, said he was scheduled to travel back to Kentucky for a Thursday review of video from the Derby, in which Maximum Security was unanimously ruled from a group of three stewards to have impeded his rivals when he veered out while leading at the 5/16ths pole.

“It was a frivolous foul,” said Glass, who expected “an interesting morning” of discussions.

Glass said a number of factors would be argued on Maximum Security’s behalf, adding that “everything will be part of the appeal — right down to the no stewards’ inquiry sign, right down the objection not being filed until three minutes and 40 seconds after the race.

Another focus for connections: The cause of Maximum Security’s veer outward. They believe that before Maximum Security made his move, War of Will ran up behind, potentially causing contact.

In the appeal sent to Marc Guilfoil, executive director of the KHRC, the Wests request purse money to be paid to winner Country House’s camp be held and to see replays viewed by stewards, recordings of the review and statements made to stewards by jockeys who phoned in after the Derby.

Glass speculated stewards may not have viewed NBC footage showing close quarters racing between War of Will and Maximum Security through the far turn.

Guilfoil has not responded to a Horse Racing Nation request for comment but told The Pressbox’s Gene McLean on Sunday that “while the decision may have been unpopular, I can tell you that it was the absolute right call. It was the absolute correct call. And, I stand behind the stewards’ decision, 100%.

“Our stewards have extensive experience, both on horseback and in the steward’ stand. They made the absolute right decision.”

Breeders' Cup Juvenile Fillies 2021: Latest odds and preview
Based on the futures market for this year's $2 mil...
x close