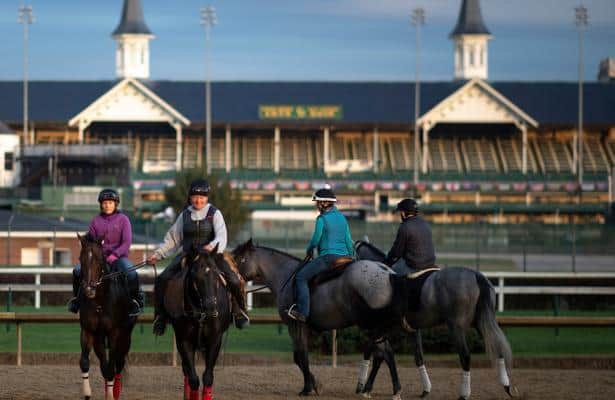 The Kentucky Equine Drug Resource Council, which advises the Kentucky Horse Racing Commission, advanced an item on Tuesday that would require horses that have taken clenbuterol to spend 21 days on the veterinarian’s list and then test clean.

Clenbuterol is a drug used to manage airway obstruction in horses, relaxing airway muscles. It is not a steroid, but is said to exhibit steroid-like effects, including the building of lean muscle.

Clenbuterol is currently banned in human sports by the World Anti-Doping Association.

The current Kentucky rules state that clenbuterol usage requires a 14-day withdrawal time. Clenbuterol prescriptions are also required to be filed with the KHRC within 24 hours of the drug being given.

The change joins a recent trend among racing jurisdictions regarding  clenbuterol, which some trainers including Hall of Famer Mark Casse have claimed is one of the most abused drugs in the sport.

The Maryland Racing Commission began working on a new rule to eliminate the allowable race-day threshold for clenbuterol, instead requiring horses to test completely clean for the drug.

The rule also brings the state closer to the May recommendations of the Thoroughbred Safety Committee, an arm of the Jockey Club, which called for the elimination of the drug from horse racing, as well as thoroughbreds consigned for public auction.

“We commend Keeneland Association, Fasig-Tipton Company and Ocala Breeders’ Sales Company for recently announcing restrictions on the use of several medications at sales,” James L. Gagliano, president and chief operating officer, The Jockey Club, said in a press release when the recommendations were made. “We encourage racing regulatory authorities to follow this example and eliminate the use of clenbuterol in racing.”

California has long had some of the strict clenbuterol usage rules in the country, enacting a ban on any amount of the drug in a horse’s system on race day in Oct. 2018.

Several top trainers have called for the drug to be eliminated altogether, including Casse, Bob Baffert and Chad Brown among others.