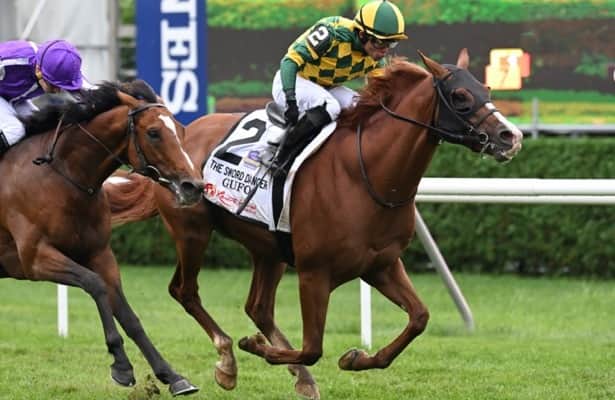 Two weeks after a Grade 1 win at Saratoga, trainer Christophe Clement is putting the star of his barn back in the starting gates.

Gufo (7-5) is morning-line favorite Saturday for the Grade 2, $1 million Kentucky Turf Cup Stakes. Post time from Kentucky Downs is 5:45 p.m., with the race broadcast on both CNBC and FanDuel TV, the network formerly known as TVG.

The Turf Cup highlights Saturday’s card at the European-style turf course just north of the Kentucky-Tennessee border. $4.95 million in listed purse money is on the line between six graded events.

A Breeders’ Cup Turf “win and you’re in” berth is also at stake. The Kentucky Turf Cup goes 1 1/2 miles, the same distance of that World Championship event scheduled for Nov. 5 at Keeneland.

Gufo already clinched a fees-paid Breeders’ Cup Turf bid by way of his Sword Dancer Stakes (G1) score Aug. 27 at Saratoga. He closed from seventh that day to beat Mira Mission by a half-length and notch the third Grade 1 win of his career.

Clement now ships the 5-year-old son of Declaration of War to Kentucky, a state where he has never raced in 19 lifetime starts. Jockey Joel Rosario, record-setting rider at last year’s Kentucky Downs meet, will pilot the morning-line favorite.

Arklow (7-2) won the Kentucky Turf Cup in both 2018 and 2020 and is back as an 8-year-old for trainer Brad Cox. The veteran Grade 1 winner made his first start of the season July 31, finishing second in Saratoga’s Bowling Green Stakes (G2).

Trainer Mike Maker has won the Kentucky Turf Cup four times and has four of the 12 runners in this year’s field. The shortest morning-line price of the four is Grade 2 victor Temple (6-1), who was third July 23 at Monmouth Park in the United Nations Stakes (G1).

Here is a look at the field for the 2022 Kentucky Turf Cup Stakes (trainer and jockey in parentheses) with morning-line odds:

TimeformUS’ pace projections show long shot Keystone Field going out to a lead under jockey Ricardo Santana Jr. Favorite Gufo is expected to attempt a rally from the back of the field.

Arklow has thrived at Kentucky Downs, a track that can be challenging for runners used to more conventional circuits. "He likes it, and when a horse likes it, you take advantage of it because there are a lot of horses that do not like it,” trainer Brad Cox said.

Trainer Chad Brown takes his shot at the Kentucky Turf Cup with Highest Honors. Reinier Macatangay writes why Brown has been on a cold streak at the Kentucky Downs meet.

The Kentucky Turf Cup is part of an all-stakes late Pick 5 with lucrative purses, full fields, and enticing wagering opportunities. Handicapper Sara Elbadwi discusses three horses all 10-1 or higher on the morning line that could at least hit the board, if not win.

This week on the Ron Flatter Racing Pod, Hall of Famer and horse owner Dan Issel tells basketball stories and talks about the unique turf meet at Kentucky Downs.

Atone (3-1) steps up in class for trainer Mike Maker off a third-place finish in an Aug. 4 allowance race at Saratoga. The 5-year-old Into Mischief gelding aims for his first stakes score under jockey Tyler Gaffalione. John Ortiz trains Mr Dumas (7-2), who was runner-up Aug. 7 in Ellis Park’s Turf Mile Stakes and who looks for his first graded win since scoring at the Grade 3 level in November 2019. Somelikeithotbrown (9-2), another Maker entry, is a Grade 2 victor who runs back 15 days after winning Saratoga’s West Point Stakes on Aug. 26.

Dalika (2-1) became a Grade 1 winner Aug. 13 when she scored a half-length win over Princess Grace in the Beverly D. Stakes at Churchill Downs. Jockey Brian Hernandez Jr. was aboard the 6-year-old Pastorius mare that day and retains the mount for trainer Al Stall Jr. Michael Stidham trains Grade 2 victor Princess Grace (3-1), who won this race in 2021 and who gets another shot Saturday at Dalika. Stolen Holiday (4-1) made the grade June 18 for trainer Shug McGaughey in Monmouth Park’s Eatontown Stakes (G3).

Set Piece (2-1), twice a Grade 2 hero for trainer Brad Cox, looks to bounce back off a fourth-place finish Aug. 13 at Churchill Downs in the Arlington Million Stakes (G1). Jockey Sheldon Russell assumes the mount on the 6-year-old Dansili gelding. Chad Brown trains Public Sector (5-2), another dual Grade 2 winner coming off a fourth-place effort, his being in the Lure Stakes on Aug. 6 at Saratoga. Pao Alto (7-2) won a Group 2 race in Qatar and makes his North American debut for trainer Graham Motion.

Campanelle (8-5) has won two Group 1 races in Europe but still seeks her first graded victory on domestic soil. Irad Ortiz and Ward team up with the 4-year-old Kodiac filly, third-place runner June 18 at Royal Ascot in the Platinum Jubilee Stakes (G1). Todd Pletcher trains Jouster (5-1), a Grade 2 winner who was sixth Aug. 7 at Saratoga in the De La Rose Stakes. In Good Spirits (6-1) upset this race in 2021 at 15-1 odds and finished fourth last out in the De La Rose for Stall.

Going Global (4-5) earned the seventh graded-stakes win of her career Aug. 13 when she won the Yellow Ribbon Handicap (G2) at Del Mar. Jockey Umberto Rispoli will get a leg up from trainer Phil D’Amato on the 4-year-old, Grade 1-winning Mehmas filly. D’Amato also trains Going to Vegas (5-2), a Grade 1 heroine who was runner-up May 30 at Santa Anita in the Gamely Stakes (G1). Local stakes winner Avenue de France (6-1) finished second to Going Global in the Yellow Ribbon for trainer Leonard Powell.

Regal Riot (5-2) owns two prior stakes wins at Hastings and now aims to make the grade for trainer Robert Anderson at the Vancouver, B.C., oval. Jockey Efrain Hernandez will get a leg up on the Jersey Town gelding, who was third Aug. 20 at Century Mile in the Canadian Derby (G3). Edgar Mendoza trains Soaringforthesun (7-2), whose sixth-place run in the Canadian Derby followed a Hastings stakes win. Arollercoasterride (9-2) won on fifth asking Aug. 13 at Santa Rosa in northern California and ships to Canada to make a stakes bow for trainer Barbara Heads.