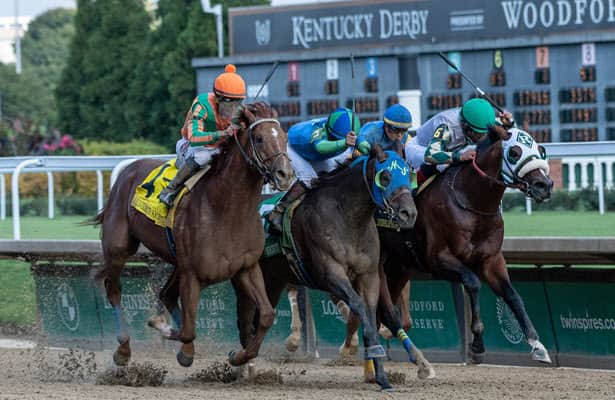 Racing on the 2023 Kentucky Derby trail resumes Saturday at Churchill Downs with the Grade 2, $400,000 Kentucky Jockey Club. The 1 1/16-mile contest, which is the sixth official Derby qualifying race of the year, attracted a field of nine 2-year-olds and offers points to the top five finishers (10-4-3-2-1).

The Kentucky Jockey Club has produced seven horses who went on to win the Run for the Roses. Super Saver, who won the 2009 Jockey Club, accomplished the double most recently with a Derby win the next year.

Here is a full-field analysis for the Kentucky Jockey Club with morning- line odds. It is scheduled as race 11 of 12 on a card that has four stakes.

1. Curly Jack (3-1 – Good Magic – Tom Amoss / Edgar Morales – 5: 2-1-0 - $340,180) Curly Jack won both of his races at Churchill as a debut winner in June in an early maiden race and then in his fourth start when he won the Iroquois (G3) by a length with a closing move. He is the leading money winner in the field and the only graded-stakes winner. Amoss sent Curly Jack to Saratoga, where he set the pace and faded to a fifth-place finish. Back in Kentucky, he was second by a head in the Juvenile at Ellis Park in August after having the lead in the stretch. He heads to back to Churchill after a fifth in the Breeders’ Cup Juvenile (G1). Win contender.

2. Western Ghent (20-1 – American Pharoah – D. Wayne Lukas / Mickaelle Michel – 7: 1-0-1 - $59,737) Western Ghent broke his maiden in his fifth start when he dropped into a $75,000 claimer at Saratoga in August. Lukas tried him next in the Hopeful (G1), where he was a distant last. The son of American Pharoah was third in a Keeneland allowance and most recently was last again when he tried graded-stakes company in the Street Sense (G3). Lukas has three wins in the Kentucky Jockey Club, in 1989, 1991 and 1997. Toss.

3. Denington (12-1 – Gun Runner – Kenny McPeek / Brian Hernandez Jr. – 4: 1-1-0 - $83,585) Denington is the first of two runners in this field for McPeek, who won the Kentucky Jockey Club three times – Smile Happy last year, Signalman in 2018 and Repent in 2001. It took Denington four tries to get his maiden victory, and that happened last month on a sloppy track at Churchill going two turns with a late rally. Toss.

4. Gigante (12-1 – Not This Time – Steve Asmussen / Corey Lanerie – 4: 2-0-0 - $171,250) Gigante broke his maiden in his second start going a mile on the main track at Colonial Downs after debuting on the grass. He rallied from fifth in a field of six and won by three lengths. He then was moved back to the turf and won the Kitten’s Joy at the Virginia track by almost seven lengths. Last month in the Bourbon Stakes (G2) at Keeneland on the grass again, Gigante finished 10th after pressing the pace. Gigante was a supplemental nomination to the Kentucky Jockey Club. Asmussen won this race three times, with Silver Prospector in 2019, Tiz Wonderful in 2006, under the name of Scott Blasi, and Private Vow in 2005. Toss.

5. Red Route One (7-2 – Gun Runner – Steve Asmussen / Tyler Gaffalione – 4: 1-0-1 - $153,225) Red Route One is a home-bred son of Gun Runner from Winchell Thoroughbreds who broke his maiden on the turf at Kentucky Downs in his second career effort. It is unusual to see an Asmussen runner on the grass, let alone two of them in the same field. This colt then was moved to the main track when he ran third in the Breeders’ Futurity at an amazing price of 59-1. The odds came down to 3-1 in the Street Sense, which was run a sloppy track where Red Route One had a rough trip and couldn’t make up much ground, ending up in fifth. Use underneath.

6. Freedom Trail (6-1 – Collected – John Terranova / Florent Geroux – 2: 2-0-0 - $118,250) Freedom Trail is unbeaten in two starts on the turf during the Belmont at the Big A meeting. He won his first start by a head with a late rally going 1 1/16 miles. Trainer John Terranova then moved him up to stakes company, and he responded with a victory in the Awad as the 1.90-1 favorite. Terranova won this race in 2014 with El Kabeir. Win contender.

7. Hayes Strike (10-1 – Connect – Kenny McPeek / Rafael Bejarano – 5: 1-1-0 - $90,782) Hayes Strike broke his maiden in his second career start at Ellis Park in August by more than four lengths when he pressed the pace. He then moved to graded-stakes company with a fourth-place finish in the Iroquois (G3) at Churchill. Hayes Strike lost all chance when he stumbled out of the gate in an allowance at Keeneland. Last seen, the McPeek runner was second on a sloppy track at Churchill in the Street Sense at the end of October. Toss.

8. Instant Coffee (5-2 – Bolt d’Oro – Brad Cox / Luis Saez – 2: 1-0-0 - $84,375) Instant Coffee was a debut winner during the final week of the meeting at Saratoga. Sent off at 14-1, the son of Bolt d’Oro rallied from off the pace to win by less than a length going seven furlongs. He came back to run fourth in the large, strong field of the Breeders’ Futurity (G1), which included Breeders’ Juvenile winner Forte and the well-regarded Loggins. Instant Coffee comes from the connections of Cyberknife and was purchased for $200,000 as a Keeneland sale yearling. Instant Coffee was included as an individual betting interest in the current Kentucky Derby Future Wager pool 2 with 80-1 morning-line odds. Top choice.

9. Cyclone Mischief (8-1 – Into Mischief – Dale Romans / Joe Talamo – 2: 1-0-1 - $65,625) Cyclone Mischief broke his maiden in his second start last month at Keeneland by more than five lengths against a field of 10 with a pace-pressing effort going around two turns as the favorite. There is plenty of room for improvement for this son of Into Mischief, who was heavily bet in both of his starts. Win contender.

Summary: The 2022 Kentucky Jockey Club drew a field of nine, including three stakes winners. Curly Jack has 13 Kentucky Derby qualifying points from his victory in the Iroquois and his fifth in the Breeders’ Cup Juvenile. The other two stakes winners came on the turf, where Freedom Trail is unbeaten in New York and Steve Asmussen’s Gigante was a winner at Colonial Downs.

There are two lightly raced 2-year-olds who also have to be considered win contenders. Cyclone Mischief was an impressive maiden winner at Keeneland by more than five lengths in his second start for Dale Romans. Instant Coffee won at first asking for Brad Cox and then was fourth in the Breeders’ Futurity behind two of the top horses in the division, Forte and Loggins.

Instant Coffee will be the top choice for Cox and Gold Square, the connections of Cyberknife.